“So @Pontifex is endorsing @BernieSanders over @realDonaldTrump? Do I have that right?”

“Is it really enough to break bread with some Jews in Brooklyn?” — The View‘s Joy Behar on Ted Cruz making Matzoh in New York this week.

Which female TV journo has a crush on Speaker Ryan?

“I’ve always thought he was hot. I said that six months ago.” — ABC’s Paula Faris on House Speaker Paul Ryan.

Journo gets to interview tennis star

“Starting off my 49th bday guest hosting the Bill Press Show, then hopping on a plane w my excellent producer Rachel Quester and heading to Miami to interview Martina Navratilova. Who would’ve thought I would be lucky enough to do these kinds of things in life? So thanks everyone for your good wishes and blessings and I’ll wrap the day later on with a huge shout out to the people I care about and love: all of you.” — Jimmy Williams, host, DecodeDC.

“This is embarrassing. I ran into Nick Jonas at the airport a couple weeks ago. I gotta…he gave me one of those bro hugs, which I gotta say is so embarrassing.” — Anderson Cooper on Friday’s edition of ABC’s “The View.”

“Trump could have cinched this if he hadn’t behaved the way he has, but you guys egged him on like it is a virtue to be unvirtuous.” — David Limbaugh, Rush’s brother.

“I went to an Equinox class today called ‘Headstrong’ which consisted mainly of throwing 10 lb bags of sand at each other.” — Mother Jones engagement editor Ben Dreyfuss.

Wesley Lowery blames use of ‘blacks’ on Twitter character limits

Not that there’s anything wrong with using the word “black” but apparently Washington Post race reporter Wesley Lowery acknowledges there is. 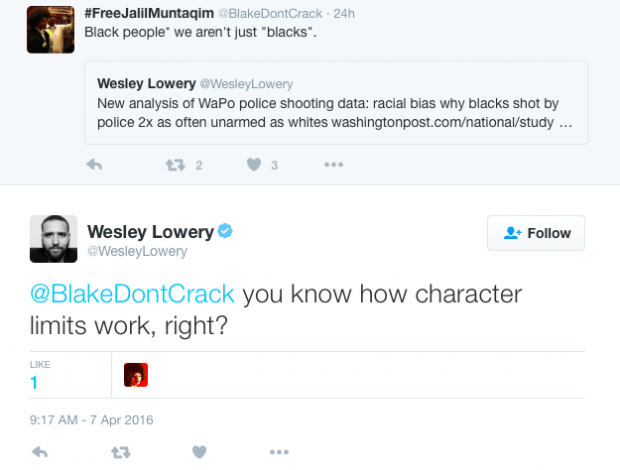