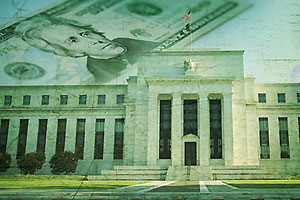 Dow Jones Industrial Average News, 4/8/2016: Earlier this year, Money Morning Chief Investment Strategist Keith Fitz-Gerald offered readers the most staggering number of the “so-called” economic recovery from the financial crisis. There has been a 93% correlation between what the Federal Reserve has done and said and the performance of the markets since 2008.

So, it shouldn’t be any surprise that when Federal Reserve Chair Janet Yellen said yesterday that the United States “isn’t a bubble economy,” the markets continued to rally. She said this, by the way, while participating on a panel with former Fed chairs Ben Bernanke and Alan Greenspan. Both infamously missed the housing bubble by years and helped fuel it with low-interest rate policy.

In fact, our Capital Wave Strategist Shah Gilani recently said that what is happening right now is similar to what happened in 2008, and it seems like everyone’s ignoring the warning signs.

Futures for the Dow Jones Industrial Average projected a 120-point gain at open as traders digest statements by members of the Federal Reserve and see big gains for energy stocks early in the session.

Here’s a breakdown of why the Dow is on the rise this morning.

Blue gold: Water stocks may seem “boring,” but humans can’t live without water. So when a company solves the critical issue of water scarcity, it’s a “must-have” investment…