On April 7, Hillary Clinton supporter ROaRR TX appears to have originated the Twitter hashtag “#endcybernbullying,” which included a link to an article written by Melissa McEwan, editor-in-chief of the progressive blog community Shakesville, and former Clinton adviser Peter Daou, the CEO of True Blue Media. The article blasted “a segment of” Sanders supporters for “engaging in bullying behavior and making abusive attacks on Hillary and her supporters.” 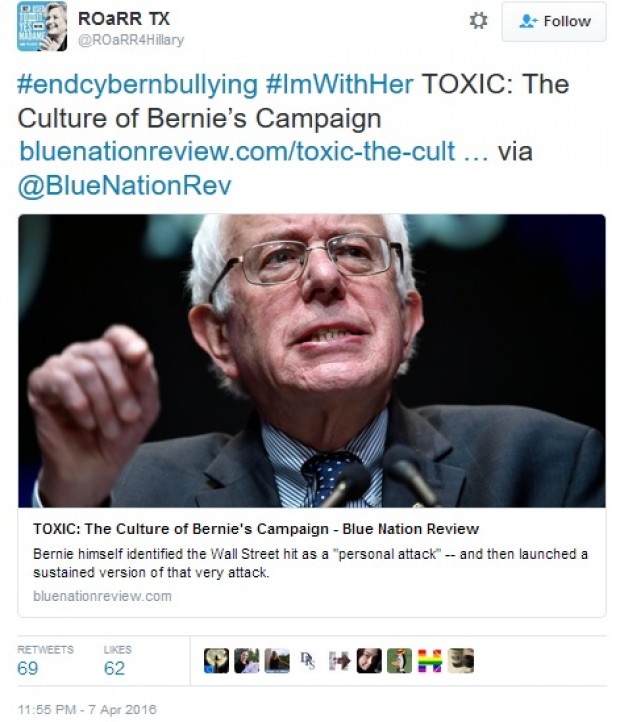 “In February, after the growing outcry against these intimidation tactics became a liability, Bernie was finally obliged to address them, saying: ‘We don’t want that crap’ and ‘Anybody who is supporting me that is doing the sexist things—we don’t want them,'” McEwan and Daou wrote.

They stated that Sanders “never explicitly directed his supporters to harass people who criticize him and/or support Hillary,” however, they still blamed him, adding, “this venom didn’t emerge from a vacuum.”

Sanders’ controversial speech weeks ago in which he claimed that Clinton wasn’t qualified to be president, mostly due to her Wall Street ties, is cited as the starting point of the “bullying behavior.” The other side argues Clinton’s accusation that Sanders was lying about fossil fuel contributions was the egg that hatched the chicken.

Last October, The Atlantic’s Robinson Meyer coined the term “Berniebro” to mockingly address the “systemic crisis occurring” on social networks, and he also blamed Sanders supporters for going negative first. Clinton held high leads over Sanders in the national polling for all of 2015, but it became a more competitive race this spring and may not end until the official awarding of superdelegates at the Democratic National Convention.

But, in November The Baffler’s Amber A’Lee Frost charged “feminist bigwigs” for “alerting their readership to the figure of the ‘Bernie Bro,’ the supposedly sexist, white, and male Sanders fan who is polluting his campaign with unrestrained hatred of women.” She wrote, “While sightings of the species are remarkably rare (even in this age of screengrabs), the feminist pundit class insists that Bernie Bros are everywhere.”

#EndcyBernbullying may have briefly trended once or twice over the last few days, but didn’t really explode until around 8 PM EST on Friday night. After someone on Twitter noted that the first mention of the hashtag appeared on their timeline, ROaRR4Hillary responded, “uh yeah I tweeted it I have followers that’s how it works.”

Friday night, a Clinton supporter on Reddit claimed, “This is really sad. We started #EndCyBernBullying to raise awareness that some berniebro(s) is(are) compiling a ‘hit list’ comprised of pro-hillary twitter accounts, making threats of stalking. Check out redlegion.org http://imgur.com/9Bvxv3s We started to get some traction with Debra Messing and Jeffrey Wright retweeting the incident.”

“EndCyBernBullying has nothing to do with Bernie, but without investigating further, Bernie follorwers turned something great into Anti-Hillary,” the Reddit user added.

After 3:00 AM EST, award-winning actor Jeffrey Wright, most known for his roles in “Basquiat” and “The Hunger Games” movies, tweeted: “1st aware of #EndCyBernBullying frm some1 pointing out a Bernie threatening to stalk folks online. Now it’s spun. I’m about to go full bore.”

Clinton supporters were upset about the website www.redlegion.org after it began utilizing “Open Source Intelligence gathering” to allegedly attack “democrat pieces of shit” who “did nothing” to stop the Patriot Act or NSA domestic spyings, and for calling leakers Edward Snowden and Chelsea Manning “terrorists.” Blasting Clinton supporters as “semi-Republican,” the blogger wrote that he would give them a “taste of [their] own medicine” by “watching all their interactions with othes on social media.”

“I’m tracking you by your ID number in case you decide to change your username,” the Red Legion blogger wrote. “I’m watching every geolocation tagged tweet, every reference to your daily live, I’m going to scrutinize everything you do.”

But Sanders supporters hijacked the hashtag and began using it against Clinton. Then her supporters came out in full force to reclaim it. And just like the argument between the campaigns about who started going negative first, the #EndCyBernBully war became equally convoluted.

At Reddit, a community member wrote, “ROFL switch it around on them AGAIN.”

“That hashtag comes off as if Bernie is being bullied and we can use that to our advantage,” FragRaptor added. “Turn it into a corporate media attack.”

Some people on Twitter were offended by the hashtag itself, since it appeared to make light of its source.

Australia for Bernie tweeted, “#EndCyBernBullying? Cyber bullying is a real issue, this isn’t. Let’s be adults & debate issues.” A reddit user commented, “That hashtag is so cringy…”

Negative campaign ads on television have impacted political races in the past, but it remains to be seen whether hashtags on social networks does anything more than start online arguments instead of changing voters’ minds about their respective candidate choices.