The governing bodies for fraternity and sorority life at Ohio University (OU) have collectively denounced the drawing of a message supporting Donald Trump on campus because it was “offensive” to Hispanics and didn’t promote “inclusion.”

In a joint letter sent to students affiliated with Ohio’s Greek Life, the student-led executive councils said that they have made a concerted effort to include everyone in this year’s Greek Week activities, but an illustration of a wall — captioned “Build That Wall!” — on a part of campus specifically designed for free expression have jeopardized those efforts. 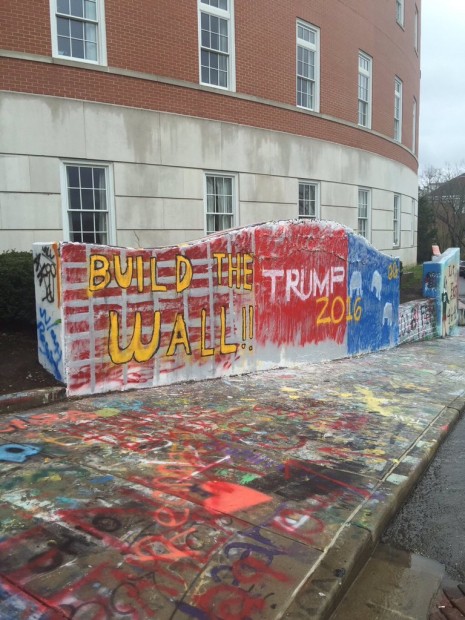 While not identifying specifically who drew the wall, the statement claims the perpetrators were from the Greek community.

“It is the opinion of leaders within our community that this message is one that does not promote inclusion and in fact, alienated members of the Ohio University Sorority and Fraternity community and our Bobcat [school mascot] family,” the letter reads. “The phrase is offensive and hurtful to many individuals as it is directly tied to the Hispanic/Latino/a community, makes them feel marginalized, and the message was interpreted that they don’t belong at Ohio University.”

The letter went on to state that those who were “negatively affected” by the wall drawing sought support from their peers, but “were ultimately not met with comfort.”

In response to this massive level of discomfort, the Greek councils decided to alter the schedule for Greek Week — which is taking place this week — to focus more on “inclusion” and to not approve any events with alcohol.

One of the changes to the schedule involves leaders having to stand behind a motivational speaker give a talk on “Leading Imperfectly” and participate in an open mic event Wednesday that allows members of the community to air grievances.

The letter — signed by the Interfraternity Council, the Multicultural Greek Council, National Pan-Hellenic Council and Women’s Panhellenic Association — emphasized the changes weren’t a punishment, it was just them “holding each other accountable.”

Ohio University President Roderick J. McDavis commented on the incident in an email sent to all OU students Monday.

“Yesterday, I met with students and members of our Hispanic/Latino community who saw words that troubled them on the Graffiti Wall. Indeed, this wall is a place of free speech and expression; however, the words painted were troubling because they had a very different meaning to some than they may have to others viewing the message or even to those who painted the message,” McDavis wrote.

The president continued his message by stressing the school’s commitment to diversity and how “everlasting” words can be.

“We have consistently been a national leader when it comes to inclusion. We have made equality and diversity a campus-wide priority throughout our storied 212-year history and we will continue to do so – I can promise you that,” he wrote. “Words are only temporary, however, their impact can be everlasting. So, to the members of the Bobcat community who were hurt by yesterday’s words, here are my words to you: I value you. I believe in you. I support you.”

McDavis held an emergency meeting with Latino student leaders last week over the incident and mandating “cultural competency” courses was an idea discussed at the sit-down, according to Campus Reform.

A member of OU’s fraternity and sorority community spoke to The Daily Caller about the incident on the condition of anonymity over fears he and his organization would be punished for speaking to the press.

He said that outrage over the mural came from the school’s African-American and multicultural Greek organizations and they threatened to boycott Greek Week if nothing was done in response to the incident. He believes the cancelling of events and addition of events promoting inclusion and acceptance is a punishment inflicted upon students for expressing their support for a particular presidential candidate. (RELATED: Is It Now A Hate Crime To Support Donald Trump On A College Campus?)

“This is a direct punishment towards those who expressed their support of Trump on the wall, but it also extends to punishing all of Greek life,” the Ohio student told TheDC. “All at a public university.”

Chalkings and drawings created by college students to support Trump have caused controversies at campuses all across the country recently. (RELATED: The Frat Site That Helped Ignite #TheChalkening Speaks Out)

Examples of the outrage include Emory University students demanding counselling after witnessing pro-Trump chalkings on campus in March and student leaders at the University of Tennessee – Chattanooga trying to oust a fellow SGA representative over her participation in a Trump drawing. (RELATED: Student Leaders At Public University STILL Want To Oust Fellow Rep Over Trump Chalking)