What gave the Dow Jones Industrial Average its best one-day gain in a month today? Oil, oil… and more oil. With a global deal likely in place to freeze production, traders are turning their attention to earnings reports for the March-ending quarter. Despite concerns that the first quarter could be the worst for earnings in years, investors are growing more optimistic that a surge in oil prices could rally the markets and provide buying opportunities for firms exposed to depressed prices over the last year. 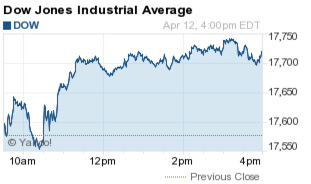 WTI crude oil prices hit a 2016 high, rallying 4.5% to $42.17, on news Russia and Saudi Arabia have agreed to freeze output levels ahead of next week’s meeting among global producers in Doha, Qatar. This announcement is critical because it indicates that any deal including additional producers will not be contingent on whether Iran decides to join the accord. In recent weeks, Iran’s oil minister has said the country will not participate in a freeze as it brings oil back to the market after years of being frozen out by global economic sanctions. Brent gained 4.3% to $44.69 on the day. Here’s what to expect for oil prices moving forward in 2016.

Oil also received a boost after John Watson, chairman and CEO of Chevron Corp. (NYSE: CVX), said in an interview with CNBC that oil markets will balance out in the coming months. Watson expects cuts to capital investment will lead to a decline in global supply, bringing the market to equilibrium. Shares of CVX stock were up 2.4% on the day.

The International Monetary Fund argued in a report released today that an exit by the United Kingdom (Brexit) from the European Union could destabilize global markets. The global financial agency is concerned companies will not be able to quickly transition to the new economies and reality of business in Europe.

The statement came after the IMF slashed its global growth forecast for the fourth time in 12 months. It now projects a global growth rate of 3.2% for 2016. Analysts anticipate that a Brexit could significantly affect global confidence. The IMF also raised concerns about the economies of China, Japan, Brazil, and the European Union. However, keep in mind we are going to use such events to find new opportunities to buy into the markets in the long term, regardless of whether the United Kingdom exits or not.

But the big news today was the performance of financial stocks. With major banks reporting earnings this week, traders set aside concerns about a downturn in the sector and pushed the stocks higher. The SPDR S&P Bank ETF (NYSE Arca: KBE) rallied 2.1% today. Tomorrow, JPMorgan Chase & Co. (NYSE: JPM) kicks off the bank earnings party by reporting its fiscal first-quarter report.