In a town hall with CNN’s Anderson Cooper on Wednesday, Heidi Cruz told an interesting anecdote about the first thing her husband Ted did when they got back from their honeymoon:

“I was completely shocked to see that he arrived back at our apartment with literally a hundred cans of Campbell’s Chunky soup,” Cruz said.

Anderson Cooper pressed on, posing the obvious followup: “All the same?”

Ted Cruz, wanting America to know he was no savage, assured, “Well, different kinds. You gotta have some chicken, some beef.”

Unfortunately, it does not seem possible to emulate Cruz and buy a 100-pack of Campbell’s Chunky soup. The most you can buy in one shipment seems to be a 12-pack (which does comes in 35 flavors). You can even utilize Amazon’s “subscribe and save” option to get the 12-pack delivered to you on a consistent basis, costing $22.57 each time. 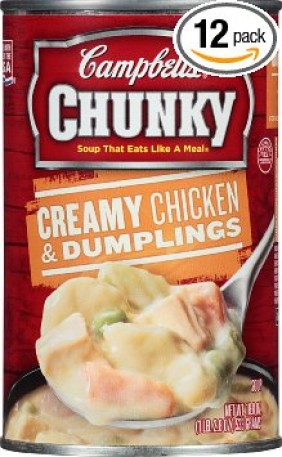 In addition to chicken, Ted Cruz would also go for beef (Photo via Amazon)

Hopefully, when Ted Cruz is president, Amazon will expand their offerings to include 100-pack tailor-made for just-married young couples.