Fallon, portraying Trump, called Cruz in order to help him prepare for the Texas senator’s interview later with Fallon.

Cruz thanked Trump for “being the bigger man” to which Trump replied, “with the bigger hands and the bigger — you can’t see me, but I’m pointing at my Trump Tower.”  (VIDEO: “Donald Trump Clarifies The Size Of His Junk On National TV)

Later Trump asked Cruz about how he won all of the delegates in Colorado. After Cruz explained to Trump how the voting worked in Colorado, Trump then suggested that the Coloradans “were so high they completely forgot” to vote. 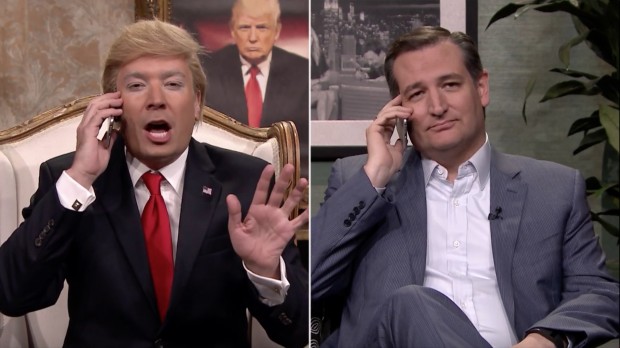 [dcquiz] Then Trump asked Cruz was to clarify his “New York Values” criticism to which Cruz said he wouldn’t be pander to New Yorkers before unleashing some tongue-in-cheek praise. (VIDEO: Trump Stuns Cruz Into Silence During ‘New York Values’ Fight)

Near the end of the bit Cruz gave up paying attention to Trump and poured himself a glass of what appeared to be liquor.