Say hello to Eddie Scarry, a media reporter for the Washington Examiner. Let’s get the full disclosure out of the way first. Scarry worked for me as a freelancer in 2012-2013 at FishbowlDC. Among the first questions I ever asked him after meeting him was, “Is your name fake?”

Asked about his ethnicity, Scarry gets cagey. “I’m from South Carolina,” he said. “Born in California.” I attempt to explain that those are states. “You want to give my stalkers too much information. You want my address and blood type too?” There’s a whole clan of Scarrys in Yugoslavia (since he won’t tell me, I’ve had to fill in the blanks of his heritage.)

Under my employ, he tended toward descriptive party coverage and a movie review that got him banned from ever covering that studio again. “Yeah, I was banned by that one publicist from coming to her bad movies,” he recalled. One of my favorite continuing series of posts he wrote involved radio host Mark Levine. Scarry dubbed him “Queen Levine.” (Eddie explained that “it turns out he’s homosexual, which we discovered only after dubbing him Queen.”)

Scarry was fond of catching people in the act of doing things. For example, during CPAC 2013, he videotaped WaPo‘s Erik Wemple tripping over a slightly raised cord protector in the media room (The Daily Caller‘s Alex Pappas also tripped over this contraption, but Scarry never caught him on film). He also caught Wemple skipping the food line at the Reuters WHCD brunch at the fancy Hay Adams Hotel (all those bite-sized muffins, such little time). He didn’t videotape that scene, but he had Wemple apologizing profusely for his ridiculous atrocity.

What’s it like to work with Scarry? For that I sought professional guidance from Peter Ogburn, executive producer of “The Bill Press Show” who also worked with Scarry at FBDC.

“Working with Eddie was wonderful. He always had the best weed,” Ogburn said jokingly by text.

On a serious (well, semi) note, he added, “Reporters always catch hell because they don’t ask enough questions. Eddie asks plenty of questions…. Most of them are dumb, but he asks them.”

I asked Scarry about his philosophy on blocking people or getting blocked on Twitter. He replied, “Are we talking about someone important blocking me? Or just some random f—?” Hmmm… He continued, “Assuming we’re talking about someone who I’d want to see their tweets, it’s a small inconvenience to open up a separate browser so I can see whatever they’re saying. I don’t mind it, but I’d rather they didn’t. I’ve probably blocked five people ever. And it’s only if they’re constantly tweeting at me and I get tired of seeing their name in my mentions.”

Besides NYT columnist Charles Blow, here are the people who have deemed him unfit for their feeds: “People who have blocked me: Sean Hannity, Touré Neblett (must use last name), Dana Perino, John Podhoretz, and Ron Fournier,” he said, noting that he and Charles C. Johnson currently have a truce.

Asked why they’ve blocked him, he quickly shut me down. “Don’t ask me about any of these people because I have no idea the reasons,” he said. “I’m sure I wrote something at some point about them that hit them where it hurts. I don’t harass anyone online, so I can only guess it was something I wrote.”

Scarry began his journalism career with internships at the National Journalism Center followed by the Washington Examiner’s then-“Yeas and Nays” gossip column while working as a sales and marketing assistant at Regnery publishing. In 2011 he became a reporter for TheBlaze. He soon added FishbowlDC to the mix and moved on to Mediaite.

Me: Is the Washington bubble harder on media reporters? How do you find that line of doing your job and upsetting people with your opinions?

Him: The job is only “harder” in that you’re an outsider among your peers. And for all the transparency reporters want, a lot of them think they’re too special to offer it on their end.

Me: What’s the meanest thing anyone has written to you online?

Bona Fides
Hometown: Charleston, S.C.
Age: 24 (Editor’s note: Please keep in mind his answer to a question at the end of the questionnaire.)
Named for: Because they couldn’t just yell, “Hey, you.”
First job ever: Kohl’s Dept. Store associate (I was very good at getting people to sign up for a credit card.)
Current employment: Washington Examiner media reporter 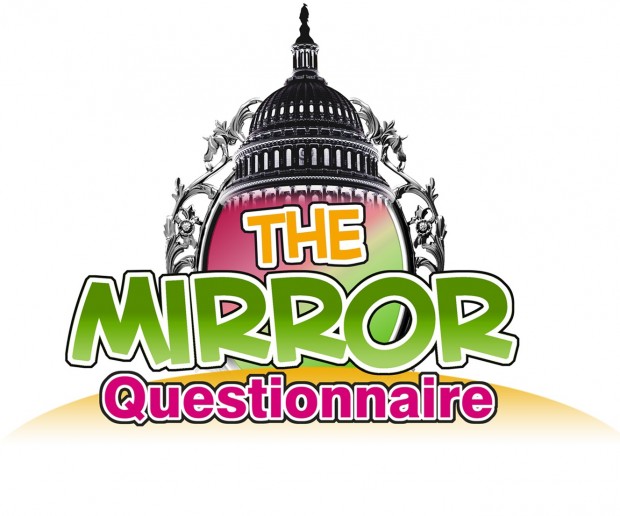 If someone wants to get on your good side, what candy or liquor should they ply you with? Jack Daniels or Peanut M&Ms

Why do you think Washington is so polarized? And please consider your answer in terms of boring us. You can make a lot of money dividing people.

How often do you Google search yourself? Once a month.

Who is your celebrity crush? Rihanna. I’d say Erick Erickson, but I’ve never been much of a chubby chaser.

Least favorite word: African-American. It’s only used by emotionally sensitive journalists who get nervous when they see a black person.

Word or phrase you overuse: “…of some sort.”

Book that touched your soul: “Green Eggs and Ham”

A thought that makes you want to cry: Michelle Fields getting another reporting job.

Weirdest habit you’ve observed in a newsroom (workplace) setting? I once saw someone use the kitchen microwave to dry his socks on a rainy day. I’m hoping that didn’t become a habit.

Time you spend on Twitter each day (be honest): It’s up all day. I just wish Charles Blow would unblock me!

If you had to kiss a politician who would it be? Rep. Sheila Jackson Lee. I’m betting on her turning into a prince.

Chuck Todd or David Gregory? Which one does “The No Spin Zone”?

What’s next for you? What would you do with your life if absolutely nothing could stop you? Something that will get me to a beach more often.

What site do you read regularly (other than your own)? I check the Drudge Report and Mediaite fairly frequently.

Do you believe in 5-year plans? If so, where do you hope to be in 5 years? No. But I’ll be writing somewhere.

Stolen from Inside the Actors studio: If Heaven exists, what would you like to hear God say when you arrive at the Pearly Gates? “Don’t worry, Al Sharpton isn’t here.”

ABC’s GMA or NBC’s TODAY Show? I don’t like cute animal YouTube videos no matter which channel they’re on.

Gwen Ifill or Judy Woodruff? Which one is sexier? Him.

Dave Weigel or Robert Costa? Both.

Your pet’s name: Don’t have one.

Anderson Cooper or Don Lemon? Who has the stronger poppers?

Mika and Joe or Oprah and Stedman?

Since this is The Mirror Questionnaire, what would you change about yourself physically if you could? Stronger resting bitch face.

And your personality? More shameless.

Preferred beach anywhere in the world: Any beach.

The snack you eat most: Lay’s Salt & Vinegar chips.

On a scale of 1 to 10, how self-obsessed are you? (10 being you can’t tear yourself away from your own daily Google search and 1 meaning you often spend time in the country away from your computer and don’t give a crap about your Klout score.) 5

Pick one – flabby thighs, cankles or love handles? Leave Ted Cruz out of this.

A thought that brings you great joy: Donald Trump’s State of the Union address.

A regret (of any kind): Hitting the snooze button.

Any brushes with death? If so, please describe. I did read a Dana Milbank column once.

Just a preference Q: Bo or Sunny? The one that pushed over that little girl.

Most annoying thing your editor (boss) does: H.R is already taking care of it.

From The Sunday Times’ Toby Harnden: If you could tell one person to their face that they’re full of shit, with no consequences, who would it be? Howard Fineman.

From lefty radio host Bill Press: Where’s the one place in Washington you’d love to have sex, but can’t? MLK memorial.

From former Rep. Weiner’s ex-phone sex partner Sydney Elaine Leathers: Who is the worst journalist on your favorite news channel? Charles Blow. Though he’s not a TV journalist, if Sydney Leathers is asking questions, there’s no reason to care.

From Washington Free Beacon’s Lachlan Markay: Which universally acclaimed piece of literature, art, film, or music can you simply not stand? The Beatles is a group of boys yelling.

From SiriusXM’s Julie Mason: What is the lie you always tell about yourself? My age. (Editor’s note: DING DING DING….look at the top of the questionnaire.)

From Stateless Media’s Peter Savodnik: Why do you matter? I think he meant to send this question to his therapist.

From Politico’s Tara Palmeri: If you could give one politician or talking head a makeover, who would it be and what would you do? Debbie Wasserman Schultz’s hair is way too Shirley Temple.

From motivational author and blogger Sophia Nelson: What do you want people to say about you, not when you die, but as you live? “I read him sometimes.”

From GotNews’ Charles Johnson: What is one idea that you have that you are certain is true that no one else has? The conservative pundits that hate Donald Trump are mostly just irritated that he doesn’t care what they have to say.

Please provide a question for the next lucky victim of The Mirror Questionnaire. Make it good. It may live on indefinitely. Who’s the most underrated journalist?