American natural gas production hit record highs in 2015, according to a Friday report by the Energy Information Administration (EIA).

America produced 79 billion cubic feet per day in 2015, breaking the previous record by 5 percent, according to the EIA.

Most of the natural gas boom in 2015 was concentrated in Pennsylvania, Ohio, West Virginia, Oklahoma, and North Dakota. Together, these states accounted for 35 percent of total American gas production while the rest of the country saw a modest decline.

Ohio’s natural gas production grew 41 percent faster last year than it did in 2014. 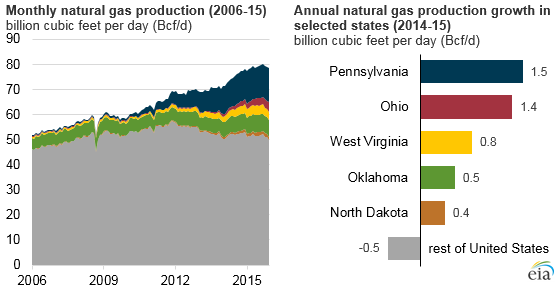 Rising U.S. natural gas production has made gas the fuel of choice for America’s power plants, which were transitioning to natural gas before 2015. Natural gas provided more electricity than coal for every month between July and October of last year, according to data released in December by EIA.