Democratic 2016 presidential hopeful Bernie Sanders’ tax plan has been talked about by everyone in the country, but as he gains traction in the polls it’s time to start wondering: “What would it mean for my paycheck?”

While the self-described Democratic socialist said his economic proposals would provide free college, Medicare for all and a slew of other new welfare programs, the cost of the expansion of government is far steeper than he is letting on.

Sanders, who has said moving people out of poverty is critical for the success of the country, would tax Americans from top to bottom to carry out his plan. Indeed, with Sanders in the White House, every income bracket – including the lowest bracket – would lose at least 7 percent of what they take home.

Scott Greenberg, an analyst at the Tax Foundation, a nonpartisan Washington, D.C.-based think tank, took a look, focusing on a hypothetical single filer with no children using the standard deduction. In the bottom 10 percent of earners, an American making $18,870 a year would see a $45 drop – or, 7.3 percent reduction – bringing their paycheck from $616 down to $571 every other week. 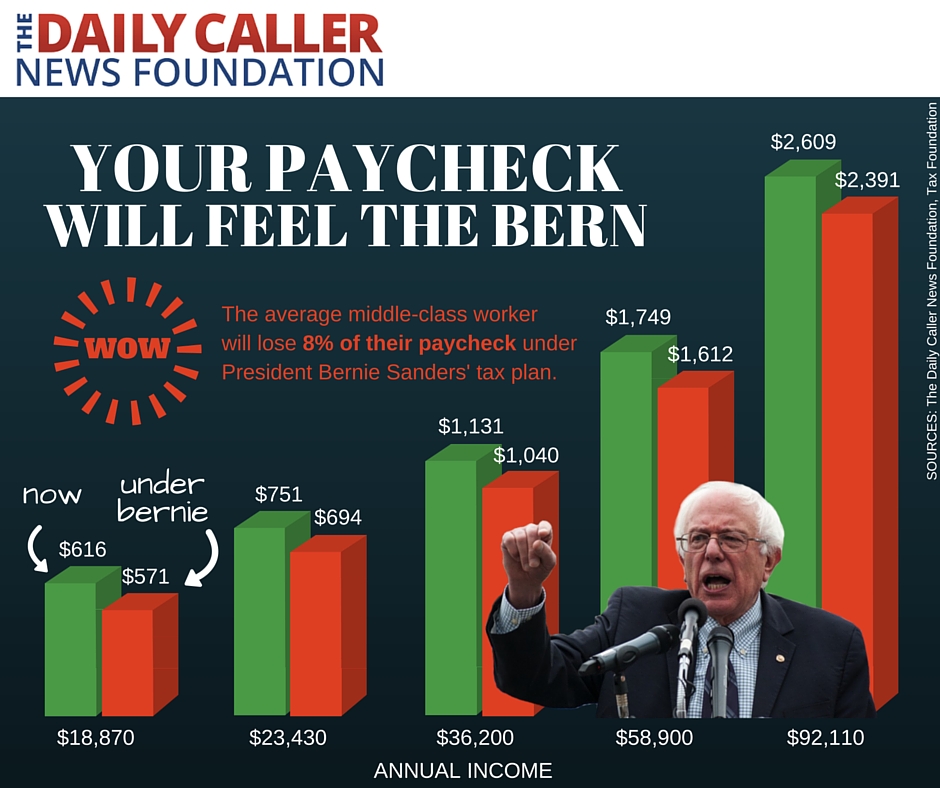 Calculations by Scott Greenberg of the Tax Foundation. TheDCNF.

Those in the highest income bracket, which is not reflected in the graphic above, would face a colossal 17.91 percent reduction in annual income due to additional taxes placed on top earners.

“Crucially, these calculations do not take into account the effects of eliminating employer-sponsored health insurance, which would increase workers’ paychecks significantly,” Greenberg cautioned The Daily Caller News Foundation, adding numbers do reflect the 6.2 percent employer-side payroll tax, the 2.2 percent individual income surtax and the 0.2 percent employer and employee-side payroll taxes. “This is because there is no way to tell how much workers would value their new, federally provided health insurance under the Sanders plan, compared to their current health insurance from their employers.”

The numbers also don’t fully depict how incomes would be affected by the projected drain on the U.S. economy Sanders’ plan is projected to cause: The GDP would drop an estimated 9.5 percent, capital investment would plummet by around 18.6 percent, wages would be reduced by roughly 4.3 percent, and just under 6 million full-time jobs would be lost, according to the Tax Foundation’s analysis.

Under the proposal, all taxpayers would face a new 2.2 percent tax on income, and a 6.2 percent Social Security payroll tax would be applied to incomes over $250,000.

[dcquiz] A financial transaction tax would be put in place with rates of .5 percent on stock trades, 0.1 percent on bonds, and 0.005 percent on derivatives, which many economists say could hinder Americans from investing.

Several left-leaning economists have come out against Sanders’ proposals, going as far as saying his plan for the economy is all “puppies and rainbows.”