The Daily Caller News Foundation attended the 17th Annual White Privilege Conference in Philadelphia, held April 15-17. The following is part of a series of articles concerning events at the conference.

The White Privilege Conference (WPC) is a very easy place to get offended.

WPC takes tremendous pains to protect everybody’s feelings. To ensure a gender non-conforming person isn’t labeled with a wayward “he,” attendees are asked to always introduce themselves with their name and their pronoun set. Presenters routinely ask for anybody to pipe up if they’re triggered by a presentation, and will apologize if such a complaint arises. Almost half the conference revolves around microaggressions and how to avoid them or defuse them.

All of this caution appears to be justified. WPC attendees, it turns out, are a touchy bunch. Here are seven things that overtly offended people at this year’s WPC.

1. The phrase “a nation of immigrants.”

Describing the United States as a “nation of immigrants” is very common, and it’s a particularly common phrase for those who oppose placing greater restrictions on immigration, illegal or otherwise.

But to the die-hard progressives of WPC, “nation of immigrants” is an appalling term that simply highlights the exploitation and genocide of American Indians and the occupation of their land. After Sunday morning’s keynote address, one attendee came up to perform a short piece of poetry denouncing the phrase.

“If you’ve ever used that term, stop using it,” he said. “It’s time to put an end to that idea, because it is wrong.” He then began a singing his poem to illustrate the point.

A nation of immigrants/is not an accurate term

Should we say nation/Or occupation?

And when we say immigrants/Let’s not be ambivalent.

He went on in a similar manner for two minutes and won substantial applause at its conclusion.

A major part of WPC are the daily caucuses, where attendees segregate themselves by race and talk through their feelings on white privilege.They were assembled collectively beforehand and assigned to a specific smaller room because of the large number of white people in attendance.

Before dispersing, attendees received a warning to be careful while walking to their rooms. Why? With so many white people going in so many different ways all at once, organizers warned they could start physically exerting their white privilege by walking too aggressively and not paying heed to their surroundings. If attendees weren’t careful, they said, they risked getting in the way of non-white attendees who would have no choice but to shy away and debase themselves before these barreling vectors of overwhelming privilege.

After attendees checked their white walking privilege and made their way to the caucuses, the group leader of one section asked everybody in attendance to give their name and their “preferred gender pronouns” to open the proceedings. One woman, apparently used to this formality, even referred to them as her “PGPs.”

But the “preferred” label irked one attendee, who said using the casual descriptor of “preferred” ignored that for some people using “he” instead of “she,” or “they” instead of “xhe,” is a life-or-death choice.

“For some people, the pronouns aren’t ‘preferred’ … [they don’t] just prefer that gender, this is, like, their whole entire identity,” he said. “There’s a lot of danger in what goes on in terms of what pronouns you use.”

4. Having too many white superheroes in one movie.

One of Saturday’s keynote speakers was Frederick Gooding, Jr., who styles himself as “The Race Doctor.” Gooding gave a half-comedic, half-serious lecture intended to point out various moments of subtle white supremacy and white privilege throughout the past year. Near the end of his address, Gooding went after Hollywood for the recently-released film “Batman v. Superman: Dawn of Justice,” which features three Caucasian heroes in the form of Batman, Superman, and Wonder Woman.

“I have a quota where it’s just a little too much whiteness, I gotta tap out,” the Doctor said to a laughing audience. “One white hero at a time, I can kinda take that, but you have two of them … but then, the White Man said, we gonna show you something. And they throw in a white woman!”

Those who follow the news may have heard by now that for a lot of people, the phrase “illegal immigrant” is decidedly not okay. No human being is illegal, the saying goes.  Instead, the phrase “undocumented immigrant” is often touted as an alternative.

But now that term may not be enough. During a workshop titled “Nativism 101,” on the topic of immigration and the groups opposed to it, one attendee objected to another’s use of the term “undocumented immigrant.”

Instead of illegal or undocumented, the woman proposed that such immigrants be labeled “unauthorized immigrants.”

WPC organizers reacted very poorly to the discovery that this year’s conference was being reported on from inside. This is unsurprising, since WPC has attempted to totally ban reporters from covering its proceedings and has actively kept them out in the past.

[dcquiz] By Sunday morning, WPC organizers were aware that several stories had been written about the conference’s proceedings, and they reacted swiftly. An email was sent to TheDCNF demanding that its reporter meet organizers in-person and sign a restrictive agreement that would prohibit him from saying or writing anything at all about what happened in the conference. This demand was not met.

Later, prior to Sunday’s keynote address, WPC founder Eddie Moore, Jr. attempted to root out the conference’s media problem by encouraging attendees be on the lookout for anybody who didn’t have a nametag. Since TheDCNF had a nametag, this strategy was useless. Speakers were also told to open their presentations by asking if a reporter was in the room, a tactic TheDCNF nullified by having its reporter not respond to this question. 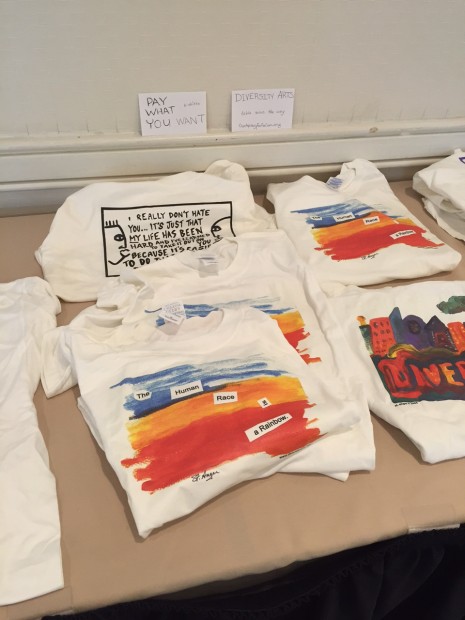 A group at WPC was operating a table that featured anti-racism shirts for sale on a pay-what-you-want basis. TheDCNF found this arrangement intriguing, so its reporter snapped a photo of it.

This provoked consternation from the woman watching over the table, who said the reporter should have asked permission before taking such an intrusive photo (that had no people in it).