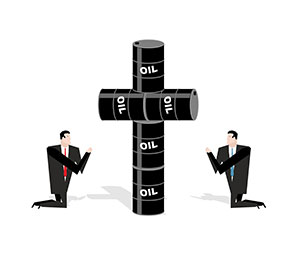 Dow Jones Industrial Average News, 4/15/2016: Global markets were cratering on Monday after a number of major oil producers failed to agree on a potential deal to freeze output.

Talks collapsed in Doha, Qatar over the weekend, fueling a massive selloff of oil. WTI crude oil prices fell nearly 5%, while Brent crude was off 4.5%.

It was a dramatic turn from just a week ago. Russia and Saudi Arabia had agreed in principle to freeze output to January levels. However, Iran decided at the last minute to skip the meeting. That increased tensions on what was already a very uncooperative situation. Analysts stated that Saudi Arabia had very little incentive to freeze production without Iran taking part in a deal.

Dow Jones futures forecasted a 63-point decline with the Doha oil conference in focus. News of the meeting’s failure hammered the U.S. dollar, which fell this morning to an 18-month low against the Japanese yen.

Here’s a breakdown of why the Dow is sliding this morning.