Washington is notorious for its oversized egos. The Mirror has compiled a list of journalists that have gone the extra mile to inflate themselves in the course of their work. Some of these people are actually likable.

12. Glenn Beck, TheBlaze: He thinks that the Lord has told him that Sen. Ted Cruz (R-Texas) should be president. “I have seen this man’s life,” Beck said of Cruz on his radio show in March. “I have watched this man. I have prayed about this man. I have prayed about it by myself, out loud, in quiet, with my family, with my staff, and I happen to believe that Ted Cruz actually was anointed for this time.”

“I don’t know why the Lord told me to tell this story but I swore I was never going to tell the story, but I learned not to edit myself with the Lord,” Beck said at a Cruz rally in February. “Here’s one of the real reasons why I left Fox. I was called into an office and I was told stop talking about God. I was told stop telling people to pray.”

11. John Bresnahan, Politico: Acts like he’s King of (Capitol) Hill and that no one (but he in particular) shouldn’t be covered by media reporters.

10. Luke Russert/Jake Sherman (NBC and Politico): Together, they are unstoppable.

9. Bill O’Reilly, FNC: God help his colleague Megyn Kelly if she surpasses him in viewers.

8. Matthew Boyle, Breitbart News: How could you not have a raging ego when you have a direct line to Donald J. Trump?

7. Joe Scarborough, MSNBC “Morning Joe” co-host: During the 2016 presidential race, Scarborough fussed about how he and Mika Brzezinski were first to express profound insight that Donald Trump would do well in the 2016 presidential race. After Joe and Mika’s so-called Town Hall, Scarborough couldn’t stop angrily defending and complimenting themselves for their prediction. “The fact of the matter is, they’re just angry because they have been wrong for nine months and we’ve been right,” he said in February. Memo to Scarborough: I kind of like you, but no one cared what you two predicted or when. You and Mika were too soft on The Donald when you “interviewed” him and that is what mattered.

6. Ron Fournier, National Journal. The Mirror shudders to think what this man — this human 24 hour Twitter machine — will do for an appearance on MSNBC’s “Morning Joe.” It’s unimaginable. An anonymous Washington insider referenced his newly published book, Love That Boy: “#LoveThatEgo,” he said.

5. David Martosko, MailOnline: A few recent comments make Martosko the perfect addition to this list. While arguing with RedState‘s Ben Howe and IJReview‘s Benny Johnson about Trump’s Secret Service agents, he remarked, “Agents are good people and you can get to know them if you show up.” And this: “Point is that you have to be out here day after day to understand it.” (Full disclosure: Martosko was formerly executive editor of The Daily Caller, but it was before my time. I’ve lunched with him once.)

4. Benny Johnson, IJReview: No one in the history of someone fired for plagiarism has anyone been more visible than Benny Johnson. He recently had this to say about the Michelle Fields/Corey Lewandowski debacle. And who better to teach us all a little something about journalism ethics than Benny Johnson? “If you defend those who commit, coverup & apologize for battery against an innocent woman, you’re a coward. Not a journalist.”

3. Keith Olbermann, Unemployed. He used to have a feature called “Worst Person in the World.” As if he doesn’t think he’s qualified to be on it.

2. Milo Yiannopoulos, Breitbart News, who is only #2 because it’ll annoy him that he’s not #1. His followers refer to him as “Daddy” and he likes it that way.

1. Wesley Lowery, Washington Post race protest organizer: At 26, Lowery thinks he’s more than ready to dispel journalism advice. In 2014, he claimed police roughed him up in a McDonald’s in Ferguson, Mo. when they shoved him into a soda machine. Police have since pressed charges against him. For all we know, Michelle Fields was injured worse than Wesley Lowery (and that’s saying something).

Lowery really likes being part of the story. But his me-ness doesn’t stop there. Just in case youngsters need his vast wisdom, WaPo opens its Tumblr account to readers who want to pepper him with questions.

He thinks a bunch of TV journalists aren’t worthy of political reporting. In a tweet he remarked, “So glad to know Anderson Cooper, Bill O’Reilly and Joe Scarborough are influential ‘political journalists.'”

But here is Wesley’s biggest humblebrag of 2016: “Getting arrested and becoming a national discussion topic is neither fun nor sexy, it is remarkably inconvenient and frustrating,” he wrote on WaPo‘s Tumblr.

And the name Wesley. Where did it come from? Wonder no more. Editor’s note: please don’t hold it against Wesley’s mom that she spelled “Mr. Belvedere” wrong. 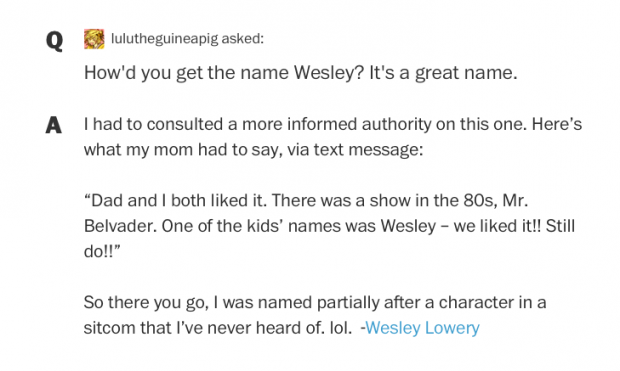 Wesley’s winning status on this list shot to number one over the the weekend. His me-syndrome flared up like a blister as he bragged at a Washington party about being on a team of writers that will win a Pulitzer Monday. The award officially went to “The Washington Post Staff” for “National Reporting.”

Wesley’s ego never rests. He insists he was in and out of the party in 20 minutes and then “slept like a baby.” And according to him, it wasn’t even a party he especially enjoyed: “As a rule, DC media parties are always trash – but my former housemate’s band played at this one, so it was alright.”