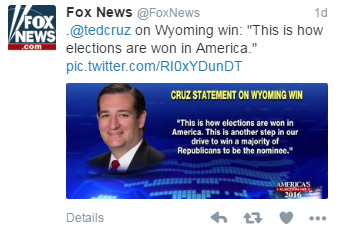 In Colorado, Cruz picked up 34 delegates; Wyoming gave him an additional 14.

Both wins were controversial because neither state held a traditional primary or caucus. The votes were instead drafted among party insiders.

Today (Tuesday), the New York primary kicks off. While Trump is expected to pick up the majority of New York’s delegates, Cruz has been polling at an average of 20% of the vote before the primary, according to RealClearPolitics.com.

Since New York’s primary is proportional, this means Cruz could potentially pick up 19 out of the 95 delegates. That’s not too bad, considering Cruz’s gaff against “New York values” at a debate in January.

As Cruz continues to challenge Trump’s lead, voters have begun to speculate what a Cruz White House would look like.

For instance, if he does become the Republican nominee, who might Ted Cruz’s vice president be?

The Texas senator has been reserved when asked about his potential running mates, but he hasn’t been completely silent.

1. Florida Sen. Marco Rubio: At a town hall meeting on April 13, Cruz had high praises for Rubio, who dropped out of the presidential race on March 16.

Cruz said that Rubio was a “terrific person” to be a running mate, but that he’s still considering who he would choose out of several options. Cruz also said at the meeting that Rubio was “very, very talented,” and that he ran an inspiring campaign.

In a recent interview on the conservative radio show “LevinTV,” Rubio also had kind words for Cruz. He said that Cruz is the only remaining Republican candidate that fits into a conservative definition.

It’s worth mentioning, however, that Rubio decided to keep his delegates bound after he dropped out of the race. He could have thrown his delegate support behind Cruz if he was really interested in being his vice president.

Our next pick made a failed run in a past presidential election cycle. He recently surprised the American public with his reemergence – and Cruz may give this politician another chance to set foot in the Oval Office…

2. 2012 Republican Nominee Mitt Romney: Cruz hasn’t specifically mentioned considering Romney for his running mate. But Romney has recently made a bold entrance back into the political sphere with his strong criticism of Donald Trump in March.

Although he had a failed presidential bid, Cruz may like Romney as a running mate because of his political experience. Romney could also help Cruz prepare for the national race, since he’s been there before.

3. Ohio Gov. John Kasich: Kasich has no path toward winning the Republican nomination on the first ballot. That’s led many to speculate whether Kasich is staying in the race to be chosen as Cruz’s running mate.

The two-time Ohio governor has a wealth of political experience, having served in both the House Budget Committee and House Armed Services Committee over his long political career. So he’d have plenty to offer as a vice president.

In late March, Kasich himself said he isn’t willing to be anyone’s vice president. Still, it isn’t uncommon for politicians to say one thing and mean another. And in a game where “yes” can mean “no,” and vice-versa, Kasich may still be positioning himself as a vice presidential pick.

4. Former Tech Executive Carly Fiorina: Fiorina has been campaigning with Cruz ever since she exited the Republican race back in February.

The Texas-born entrepreneur has a lot of experience in the private sector, given her tenure as the CEO of Hewlett Packard. At Cruz’s side, she could lend knowledge of the tech industry, one of America’s fastest-growing sectors.

5. South Carolina Gov. Nikki Haley: Haley has been anointed by many in Republican circles as the next Republican superstar. She was given the honor of delivering the GOP’s response to President Barack Obama’s State of the Union address in January.

Although Haley endorsed Rubio for the Republican nominee, she still could be a potential vice presidential pick for Cruz.

As the daughter of Indian immigrants, Haley could help Cruz improve his appeal among minority and women voters.

Who’s Afraid of Donald Trump? A powerful group of men joined together on Jekyll Island. Their goal was to secretly work their influence over the American people. And to stop the progress of Donald Trump’s presidential campaign… at all costs….