A teaching assistant in the University of Wisconsin-Madison’s Afro-American studies department canceled a class on Thursday just hours after campus police located a black student — in a separate class — and arrested the student because he allegedly spray-painted “FUCK THE POLICE,” “THE DEVIL IZ A WHITE MAN” and much other graffiti on a bunch of buildings all over campus for half a year.

A University of Wisconsin campus source who wishes to remain anonymous told The Daily Caller that Davis skipped his weekly discussion section at virtually the last minute.

Davis is regularly scheduled to lead a 50-minute weekly discussion class for a three-credit course called “Hip-hop and Contemporary Society” each Thursday beginning at 2:25 p.m.

On Thursday, students who showed up to class ready to learn found no one in the classroom.

Davis had sent a curt email to students — at 1:08 p.m. on Thursday — informing them that the class was cancelled. The teaching assistant labeled the reason for the cancellation as an “emergency.” 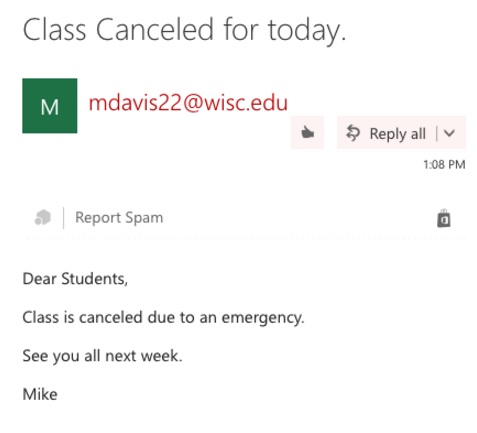 The Wisconsin-Madison student arrested by campus police on Thursday is Denzel McDonald.

Other graffitied statements police attribute to McDonald include “THE DEVIL IZ [sic] A WHITE MAN — GOD,” “DEATH TO THE PIGZ [sic] — GOD” and “WHITE SUPREMACY IZ [sic] A DISEASE” — GOD.”

A “FUCK THE POLICE” message also defaced a taxpayer-funded building, according to Inside Higher Ed.

During one instance of the graffiti rampage, McDonald allegedly threatened to kill a witness if the witness called police, reports Madison CBS affiliate WISC-TV.

The spray-painting vandalism caused over $4,000 in damages to university property, police said, according to the Wisconsin State Journal.

The arrest of McDonald while he was in class on Thursday caused much furor among University of Wisconsin-Madison radicals. Several hundred angry professors and students have signed a letter complaining about racism because campus police had interrupted the class taught by Johanna Almiron.

The letter, published Thursday, charged that school officials are “more interested in protecting the symbols of UW as a progressive institution like their buildings” instead of “the students who are actually fighting for social change, and apparently their lives.” The letter complained that campus police “did not recognize Dr. Almiron’s authority in the classroom.”

The missive also explained that police took McDonald “to the Dane County Jail, where supporters later posted his bail.”

Davis is among the signatories of the letter. In his signature line, he identifies himself as “Michael Davis, Graduate Student, Afro-American Studies/Educational Policy Studies.”

At 4:52 p.m. on Thursday — and again at 4:55 p.m. — Davis took to his personal Facebook page to promote an effort to raise funds for McDonald. The crowdsourced fundraising endeavor is entitled “Reparations for King Shabazz.”

The fundraising effort advertised by the taxpayer-funded teaching assistant on Facebook had raised $1,872 from 56 people as of early Tuesday morning.

Supporters of McDonald have also planned a campus protest for this coming Thursday, April 21, called “We Are GOD: A Day of Disrupting white Supremacy & Anti-Black Racism at UW-Madison.”

“At the same time King was taken out of his classroom by UWPD (11:30am), we will be walking out of our classrooms to stand in solidarity with him and to organize against the anti-Black racism that has plagued our campus historically and contemporarily,” a Facebook description of the demonstration explains. “We will be delivering our demands to the Chancellor and UWPD and need student support. We have to let them know that there are consequences for perpetuating white supremacy.”

Davis has indicated on Facebook that he will attend the Bascom Mall demonstration. 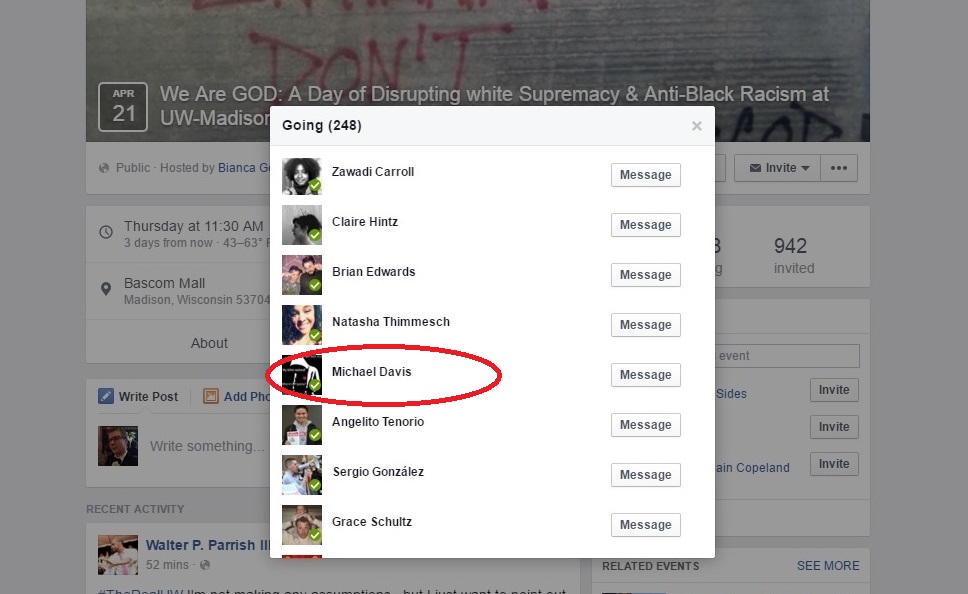 In a peculiar Facebook posting from April 13, the day before McDonald was arrested, the University of Wisconsin teaching assistant linked to a bizarre conspiracy theory implicating former President George Bush and former U.S. Rep. Barney Frank in a “child sex ring” involving “a taste of the ‘Voodoo Drug.'”

On Friday, Wisconsin-Madison’s chief of police, Susan Riseling, posted a statement responding to the uproar over McDonald’s arrest and profusely apologizing for arresting McDonald in class.

“Because of the officer’s error in believing the class had not yet started, I extend my sincerest apologies to the students and the professor who were in this class and witnessed this interruption,” Riseling wrote. “We are initiating a review of our officer’s action entering the classroom.”

Riseling also noted that campus cops had been attempting to contact McDonald for two weeks before finally deciding to try to find him in class. The officers believed they were entering class before it started, she added.

“I know there is a lot of frustration on campus about the climate for students of color,” Blank wrote, according to Inside Higher Ed. “I share that frustration.”

The seething rage over McDonald’s arrest for vandalizing buildings to the tune of over $4,000 comes at a time of constant smatterings of protest on the Wisconsin-Madison campus over racist and anti-Semitic incidents — some verified and some alleged. Much of the protest has been confined to social media. Also, somebody made a banner portraying the school’s Bucky the Badger mascot as a Ku Klux Klan member.

The charges against McDonald are 11 counts of vandalism and one count of disorderly conduct. His next court date is Thursday.

The “Hip-hop and Contemporary Society” course for which Davis is a teaching assistant “traces hip-hop’s origins in Jamaica and the Bronx, its evolution in various regions of North America, primarily the United States, and its emergence as a global phenomenon.” It is Afro-American studies 154. (Lectures, taught by a professor, occur on Mondays and Wednesdays.)

The class in which McDonald was arrested appears to be titled “Towards the Black Fantastic: Afro-futurism and Black Visual Culture.”

Davis is listed as a teaching assistant on the University of Wisconsin’s department of Afro-American studies page.

University of Wisconsin-Madison police have published videos of their encounter with McDonald on YouTube.