Because of this week’s huge win for GOP front-runner Donald Trump in the New York primary, readers are asking us “Will there be a contested convention in 2016?”

First, here’s what you need to know about a contested convention.

Both the Democratic and Republican political parties have usually picked a nominee before the official convention that occurs in July. When a chosen nominee is not in place, the parties have contested conventions.

A contested convention happens when no candidate has tallied the minimum delegate count to win their party’s nomination. This number is 50% of the total delegate number, plus one. That guarantees a majority. 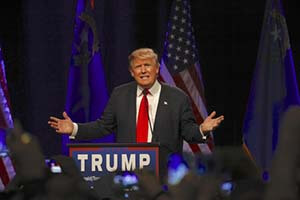 With a commanding lead and substantial win in New York on Tuesday, former Secretary of State Hillary Clinton looks like the Democratic nominee. A recent CNN poll shows 92% of respondents believe Clinton will indeed represent the Democrat party. At last count, Clinton had 1,930 delegates and Senator Bernie Sanders had 1,223. It’s still too soon dismiss Sanders as a viable candidate, but his chances appear slim.

On the other hand, the race for the Republican nomination is much closer, and there’s still a possibility for a contested convention in 2016.

Donald Trump is at the front of the pack and extended his lead with an outsized win in New York last night. Trump now has 847 delegates, Sen. Ted Cruz has 553, and Gov. John Kasich has 148.

What Is a Brokered Convention?

Last night’s sizable win made a 2016 contested convention much less likely, but one is still a possibility. If Cruz continues to make strides, he could catch up and even pass Trump -particularly if Kasich drops out.

Should there end up being a contested convention in 2016, here’s what readers will need to know…

What You Need to Know About a Contested Convention in 2016

In the event of a contested convention, convention delegates hold multiple ballot votes until one candidate has received a majority.

Rules vary by state regarding how many times state delegates are required to vote for the candidate that won in the state primary. Usually by the third round of voting, delegates become “unbound” and can vote for whoever they choose.

Other rules are set by a convention rules committee, and they can have a major impact on the election process.

For example, GOP rules state a candidate needs to win a majority of delegates in at least eight states in order to be nominated at the convention. That could change this year.

The Republican Party rules committee is made up of 112 party officials. Each state has two officials, and two officials each go to Washington, D.C., and the five U.S. territories.

The last time a contested convention decided a winning U.S. president was in 1932, when Franklin D. Roosevelt was elected. Alfred E. Smith, then the dominant Democratic politician in New York, nearly tripped up Roosevelt’s win.

The most recent contested convention was in 1976. Sitting president Gerald Ford, who became the Commander-in-Chief in the wake of Richard M. Nixon’s resignation, eked out a win against Ronald Reagan.

Super PACs and the Rise of Dark Monday: Big money now has limitless influence over our election cycles. In this video, we uncover exactly how wealthy donors have hijacked American politics…