There is a lot of great Reagan apparel on the market, most of it reasonably priced. The funniest, however, is probably this “I Smell Hippies” T-shirt. 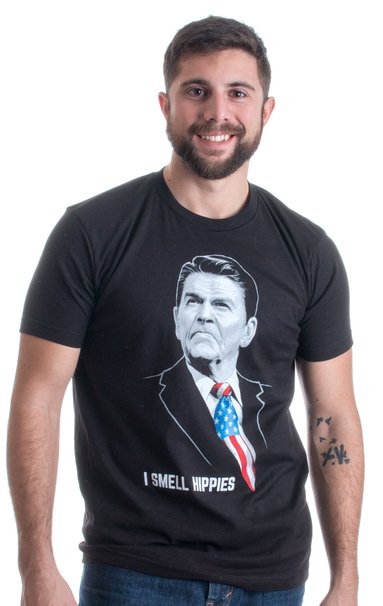 Reagan had a famously antagonistic relationship with the nation’s unwashed youth, as evidenced by his quote comparing the hippie odor to that of Tarzan’s chimpanzee. This shirt succinctly captures Reagan’s outlook. In all of his stately grandeur, the 40th president scrunches his nose, increasingly made aware of the unpleasant stench in his presence.

The best part about this T-shirt is the color scheme. On the whole it is simple — black and white, like the motion pictures that launched Reagan’s career. But the patriotic Reagan wears an American flag tie that really pops out with red, white and blue.

This is the perfect shirt for those who want to display their love of the America as well as contempt for those trying to dismantle it.

WATCH “Ronald Reagan Versus The Hippies”:

1
'I'm Cutting You Off': Whoopi Goldberg Mocks And Interrupts Alan Dershowitz, Then Accuses Him Of Disrespect
Media
2
Lev Parnas Gave Congress The Contents Of His iPhone, Including His Searches On Sex-Hookup Websites
Politics
3
AG Barr Compares Working With Trump And Bush: 'I Love Both Men,' But Trump 'Listens'
Politics
4
'Don't Mess With Texas!': Beto-Backed Candidate Goes Down Hard In Closely-Watched Texas Race
Politics
5
'They Laugh At Anyone Who Speaks With An Accent': Fox News Panel Gets Heated Over Viral Don Lemon Clip
Media