States with lucrative subsidies for wind power such as California, Oregon and Washington saw huge decreases in the amount of wind power generated during 2015, according to a Thursday report by the Energy Information Administration.

The only major state to see large increases in its wind power capacity in 2015 was Texas, the EIA report found. Wind power in America grew slower last year than at any time since 1999, and produced a mere 4.7 percent of all electricity generated in the U.S. during 2015.

Experts broadly agree that the wind industry is growing at it slowest rate in years, in part because of low wind speeds, but also because of changes in the structure of subsidies, issues with reliability, and consistently high prices. Investment in wind power is expected to decline substantially due to slowing growth, according to a 2015 International Energy Agency report.

Much of the decline was due to a 20 percent drop in average wind speeds relative to the previous year, and the trend appears set to continue in 2016, according to a February report by New Scientist. As a result, the amount of electricity produced by wind turbines dropped 6 percent even though lots of new turbines were built, according to the EIA.

Meteorologists say that unusually slow winds are due to a persistent high pressure system that is diverting storms into the Arctic which is not linked to major climate events. 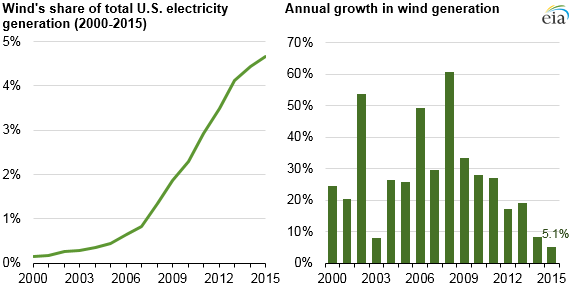 Since the output of wind turbines cannot be predicted with high accuracy, grid operators have to keep excess reserve running just in case. Adding power plants which only provide power at intermittent and unpredictable times makes the power grid more fragile.