The Daily Caller News Foundation visited the Calvert Cliffs Nuclear Power Plant in Lusby, Md., April 20th. The following is part of a series of articles about the tour.

The Calvert Cliffs Nuclear Power Plant sits on the western shore of the Chesapeake Bay about 50 miles outside Washington, D.C. It directly employs 900 with an annual payroll of almost $125 million. It shells out $22.8 million in taxes each year.

The plant shown above contributes $397 million to Maryland’s gross domestic product, mostly by keeping the price of electricity low, and indirectly creates another 1,400 in-state full-time jobs, according to a study by the pro-nuclear group Nuclear Matters. 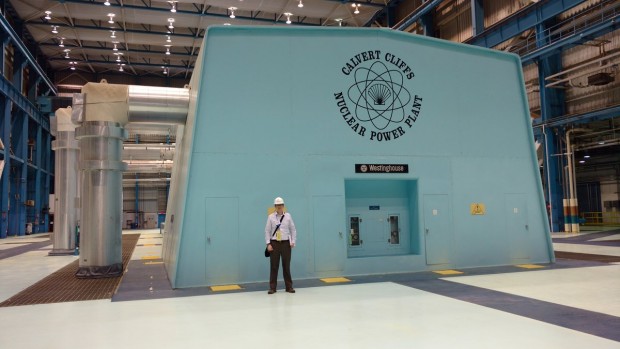 The two reactors generate heat which spins turbines, like the one shown above. These turbines have been generating 1,750 megawatts of electricity, enough energy to power about two million homes and businesses, or about 30 percent of Maryland’s power, since 1977.

America currently operates 99 nuclear reactors across 61 commercially operating nuclear power plants, according to the Energy Information Administration. The average plant employs between 400 and 700 highly skilled workers, has a payroll of about $40 million and contributes $470 million to the local economy, according to the Nuclear Energy Institute.

Within the past two years, six states have shut down nuclear plants and many other reactors are risking premature retirement. When the two-reactor San Onofre nuclear plant in Southern California was shuttered in 2012, consumers paid an extra $350 million for electricity, according to academic research.

Unlike solar and wind, nuclear power receives no federal tax credits or state green energy mandates. Nuclear power does receive subsidies, but it gets 81.5 times less than solar power per unit of energy generated.