Vanity Fair writer Christopher Hitchens had a lot of interesting conversations about God. That’s putting it politely. They were more like drunken smoke-filled shout fests. Hitchens, a self-proclaimed atheist, even predicted someone might say he found God before he died of esophageal cancer in 2011.

That day has come.

Author Larry Taunton, founder and executive director of the Fixed Point Foundation, claims Hitchens contemplated a conversion to evangelical Christianity before his death. His newly released book is The Faith of Christopher Hitchens: The Restless Soul of the World’s Most Notorious Atheist. In it, Taunton writes about the two road trips they took in which they laughed, argued and studied the Bible.

Taunton is growing increasingly annoyed at religious publications that claim he asserted that Hitchens had a conversion.

Taunton, an evangelical Christian, gave a reply that wasn’t so forgiving. Despite thanking them, he also wrote, “No doubt the next headline will say my book claims Hitchens was actually a member of the Illuminati.”

And a few days ago there was this: “The astonishingly bad journalism continues. I say no such thing. Do any of these people read books?”

His website also reflects his irritation with people misinterpreting what he wrote. “To to my atheist readers (and Christian and whatever), I say this again: read the book,” he wrote in a piece entitled, “Rumors, Internet Trolls, and Twitter Nonsense.” “If I had set out to write a story of fiction, I would have written the ending much differently than how this story ends. So I urge you to read it rather than “judging a book by its cover.”

On the Fixed Point website, Hitchens gives a mostly positive plug for the non-profit organization devoted to defending the Gospel: “Seeking vainly to be a still center in a turning world, Fixed Point nonetheless succeeds in upholding a very high standard of fairness and care in the presentation of the issues.”

Friends have doubts. In a story in Utah’s Deseret News, Steve Wasserman, a longtime friend who helped handle his estate, called Taunton’s claims “petty” and “appalling.”

But before he died, even Hitchens played coy. “‘No evidence or argument has yet been presented which would change my mind. But I like surprises,'” he told an interviewer, as reported by The Daily Mail.

That seems rather hopeful for those who wanted to see him have a change of heart. But in his final book, Mortality, he wrote, “If I convert it’s because it’s better that a believer dies than an atheist does.”

The Weekly Standard‘s Matt Labash, who knew him and argued religion with him, can’t say for certain whether there is any truth to this post death revelation. “Who knows about the validity – I wasn’t privy to their conversations,” he old The Mirror. “I do know there’s some quote out there of Hitchens that if anyone claims he had a deathbed conversion, don’t trust it. (I paraphrase.) But then, if he was teetering toward belief, you might expect him to say that in the interest of covering his tracks. He did have just a little skin in the atheist game by that point.”

The whole thing harkens back to an essay by The Weekly Standard‘s Mark Hemingway in which he writes about his wife kissing Hitchens and his plight at a party at Hitchens’ Dupont Circle home to sway his disbelief in God. At the party, there’s an undisclosed “friend” who had a loud argument with Hitchens about it — that was Labash. 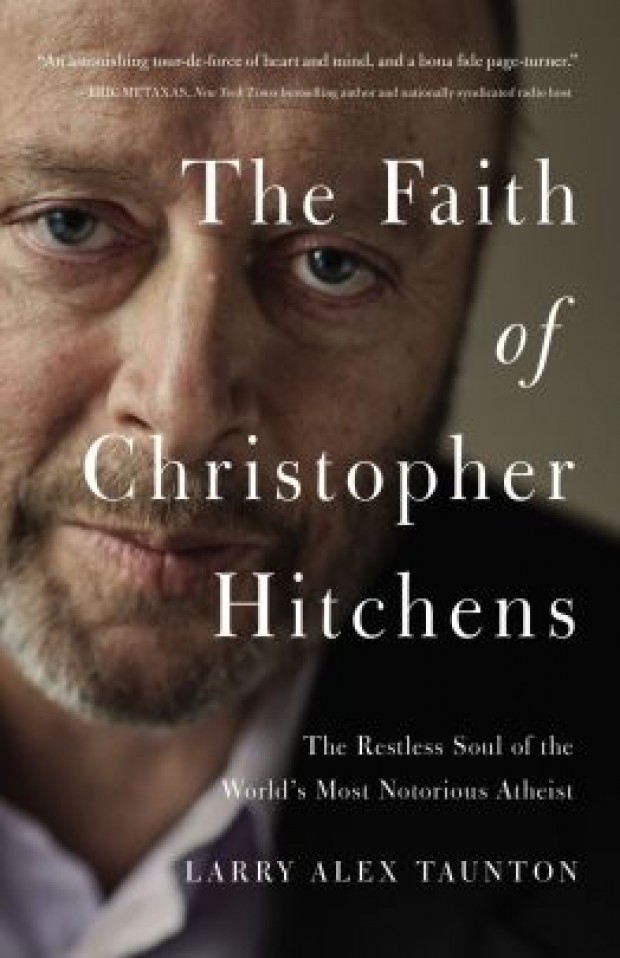 “I should add that I have no evidence that he was, despite our best efforts,” Labash continued. “I can only speak to my experiences with him, and I wasn’t his closest pal or anything. We only saw each other on occasion. But the last time I saw him, when he was on his final lap, we tried to gang-tackle him for the Lord, in the interest of Christian duty. My impression then, and if memory serves – this was January or so of the year he died – was that he would not be moved, even with a bottle of Glenmorangie in him (and us.) He took it all in, I should add. When you talked God with Hitchens, as I had several times in private, he was always a gentleman in his unbelief. And he knew the Bible better than most bible-thumpers. He was very impressive, that way. Though I always imagined a few of the red letters (Christ’s words) might have sunk in. Hitchens was a persuasive force, but so was J.C. That’s why they named an entire holiday after the latter.”

Hemingway wants the premise of Taunton’s book to be true. He just doesn’t know that it is.

“I only met Hitchens a few times, and am not really qualified to judge Hitchens’ intent,” he told The Mirror. “My very limited sense of him personally, and more definitively through his writings, was that he regarded arguments as a very exploratory way of getting at the truth. Certainly Hitchens was no stranger to conversions of the ideological sort and, as a Christian, I desperately hope hope Taunton’s claim is true. But just as I don’t think he was as hard and fast an atheist as he let on, I also think Hitchens could be very impish in saying things to further an argument. So while I’m not attacking Taunton’s claims or his veracity because I don’t know what transpired there, from the outside I think it would be difficult to judge the sincerity of any feints toward religious conversion, even if dying does tend to have that effect on people.”

“After Hitchens died, I seriously said a prayer on his behalf,” Labash recalled. “Something along the lines of, ‘God, I know we’re supposed to believe in you, etc. etc, in order to gain everlasting life/our time-share in Heaven. But if you’re going to make an exception for anyone, Hitchens is your man. After all, even when he was struck with throat cancer, when his very voice was practically taken, he didn’t cry uncle, and try to cut a last minute deal. Give him points for sticking to his guns. Consistency has to count for something.'”

“Hitchens caused a lot of atheists to double down, and he probably minted a few new ones, but he also actually steeled a lot of people’s faith,” he said. “Sometimes the best way to figure out what you believe in, is by being forced to argue against what you don’t. Hitchens forced that argument. He was the very best sparring partner, God love him.”

His son had extensive insight on Hitchens en route to his father’s book party in 2010.

“My then nine-year-old son asked who was going to be there,” Labash said. “We listed several of the guests, including Hitchens, and my son recognized his name from prior conversations. ‘Oh, he’s the one who doesn’t believe in heaven or hell.’ That’s right, we told him. ‘Well,’ Luke continued, ‘he’ll believe in hell when he gets there.’ I thought it was funny enough that I told Hitchens that when I saw him. When he met my father-in-law, he said, ‘Oh, so you’re the grandfather of the little bastard who said I’m going to hell.'”

Labash still has hopes for Hitchens and heaven.

“Here’s hoping the little bastard was wrong,” he said.