Ex-Politico Prez and CEO Jim VandeHei got the shaft this week by several male liberal writers after he wrote a piece for the Wall Street Journal saying the country needs a third-party candidate.

The Weekly Standard‘s Editor-in-Chief Bill Kristol seemed to be the only conservative male who liked it (or who was willing to publicly say he liked it). “Good piece by @JimVandeHei, as the case for and plausibility of an independent candidacy goes mainstream,” Kristol wrote.

Glenn Beck‘s TheBlaze had a completely neutral review of the op-ed.

But for other male journalists, it was their moment to finally kick VandeHei in the nuts. 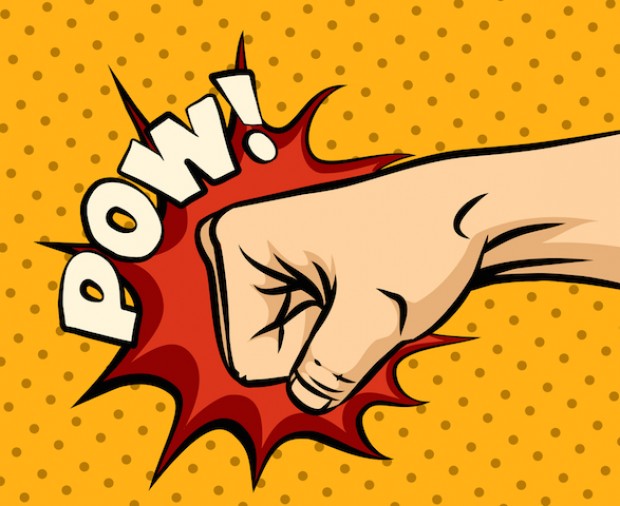 “VandeHei’s ideas are dumb and bad, and he uses a lot of virtually meaning-free terms like ‘disruption’ and ‘innovation,’ all in the service of a bizarre and rather grim vision,” wrote HuffPost‘s resident fat ass Jason Linkins in a pretty searing takedown. “…Poor, dim Jim. He actually thinks that just because he’s spent time in Oshkosh, Wisconsin, and Lincoln, Maine (both of which are white enough to sweep the Oscars), he’s somehow an authority on the needs and wants of ‘real America.'”

VandeHei recently left the publication he helped create in 2007. He left seven months ahead of schedule. So he has time on his hands to write editorial pieces like this one as well as a story he recently wrote for The Information about “crap trap” digital journalism. Before that he gave a lengthy breakfast interview to NYT media writer Jim Rutenberg about the media’s state of affairs that left Rutenberg begging him to be careful with journalism’s “core values.”

David Sirota, a senior editor for the International Business Times, chose a relatively tame insult compared to the others. “Kudos to Jim Vandehei for great Dr. Strangelove-style satire,” he wrote on Twitter. “This must be satire…right?”

Ryan Cooper, a columnist for The Week, used his butter knife: “*Puts ear to ground.* I sense the thunder of Jim VandeHei being an utter tool.”

Dylan Matthews, a staffer at Vox, also didn’t care for the op-ed. “Jim VandeHei appears to not understand how politics works in the United States,” he wrote.

Another writer wants to smother VandeHei to death for the WSJ piece, which seems more fitting for a member of ISIS than VandeHei. I’m leaving him out because his goofball Twitter username includes the words “BigSexyJeb!” 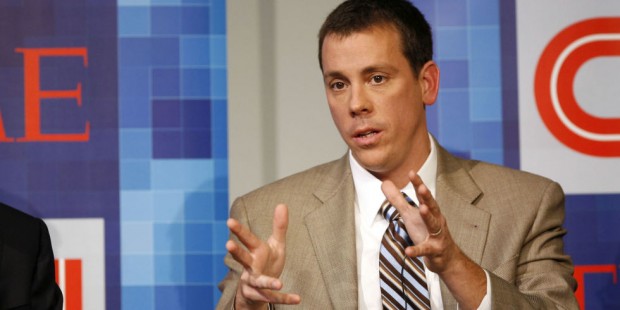 Slate‘s overly sensitive Isaac Chotiner was also incredibly incensed by VandeHei’s op-ed. So much so that he wrote his very own hit piece entitled “Ex-Politico CEO Loses The Morning With His Vapid, Deranged Call For A Third-Party Candidate.”

He seemed to take the whole thing so personally. He called VandeHei’s op-ed the more “clueless and despicable” piece that he’s ever read from a  current or former journalist. He continued tearing it down, writing, “That it manages to be at once both sinister and utterly banal is its signal achievement.” (He likes stuffing as many insults into his sentences as possible. He later called VandeHei’s mind “special” and his piece “simultaneously so pointless and so perverse.”)

On VandeHei’s suggestion that a third-party candidate should “exploit cable TV’s addiction to whatever is hot and new,” Chotiner says, “This is gross enough coming from someone in the media.”

He goes berserk when VandeHei suggests that this third-party candidate needs to “exploit the fear factor.” VandeHei did go off the branding deep end with this point. “People are scared,” he wrote in the WSJ op-ed that elicited so much liberal male static. “Terrorism is today’s World War and Americans want a theory for dealing with it.”

“For a media personality to call for it in the midst of a campaign that has seen unprecedented levels of bigotry and xenophobia is the ultimate monument to the Politico view of politics as a mindless exercise in signaling and brand management,” he wrote.

Esquire‘s Charles Pierce also couldn’t resist taking his bite out of VandeHei. He called him “one of the founding geniuses of Tiger Beat on the Potomac.” He went on to completely disembowel the piece but conceded he may be out of touch. “It is possible that I simply am getting old and I don’t understand what the kidz are doing for satire these days,” he wrote. “I certainly hope that’s the case because, if this thing is meant to be taken seriously, most of the muscles in its language are actually in its head.” 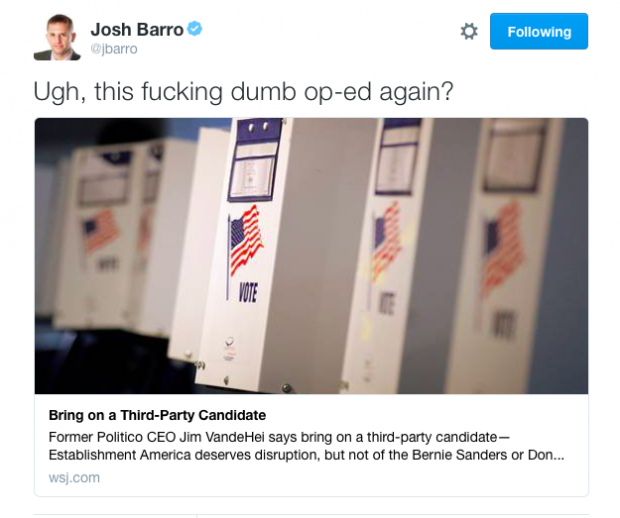 Linkins somehow tore himself away from Sunday brunch to punch VandeHei in the gut: “Jim VandeHei is one of those people who, when he publishes his thoughts, causes the world to convulse in an audible groan.”

And probably the mother of all insults: “I’m embarrassed for him, I pity him and I sincerely hope he finds some billionaire to give him money — so long as that money is given to him with one string attached: He can never write again.”

Careful, guys. You may need to work for him someday.

Photo above by Shutterstock.