A forerunner of the conservative crusade against transgender bathrooms is trying to backtrack a gaffe from earlier in the week.

Republican State Sen. Buck Newton, a sponsor of North Carolina’s transgender bathroom law, is defending himself from attacks after he sparked outrage by saying “we must fight to keep our state straight.” North Carolina has been the center of the LGBT debate after it state passed a law blocking local governments from passing LGBT discrimination ordinances and saying people must use the bathroom that corresponds with the gender on their birth certificate.

“Go home, tell your friends and family who had to work today what this is all about and how hard we must fight to keep our state straight,” Newton told rally attendees during his speech, Reuters reports.

Newton came under fire for his comments.

“One of the Republican sponsors of HB 2 just admitted the real purpose of the law: to make North Carolina unwelcoming to (lesbian, gay, bisexual and transgender) people,” Democrat Spokesman Dave Miranda said in a statement.

But Newton took to Facebook to defend himself, saying he “didn’t intend anything malicious or discriminatory.” 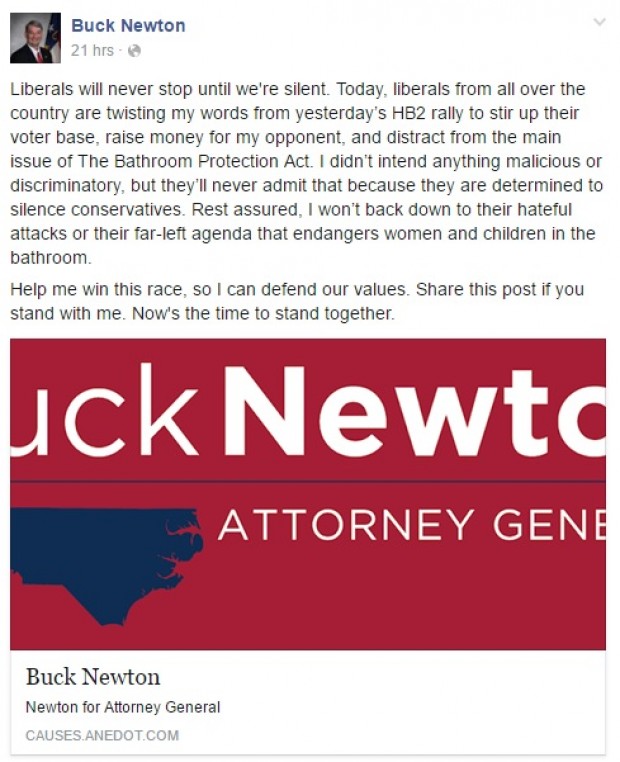 Charlotte’s city council passed an ordinance to allow people to use the bathroom they say aligns with their true gender, regardless of their biological gender. Supporters of the ordinance described it as an anti-discrimination bill that protects transgender people, but opponents said men would exploit it to legally use women’s restrooms and locker rooms. In response to the city’s ordinance, the state quickly passed HB2, the law at the center of the LGBT debate now.

Georgia’s legislature passed a similar bill in March, but the state’s governor vetoed it after a slew of large businesses in the state voiced their opposition. Mississippi passed a law in April saying people can refuse service based on their belief that sex belongs within marriage, that marriage should be between a man and a woman, and that gender corresponds with your anatomical gender at birth. That law was met with outrage as well.