If there is one thing to say about Donald Trump’s supporters, it is that they sure have some great swag. Be it non-PC T-shirts or 3-dimensional socks (not to mention the hats) the Trump Train has mastered putting its politics on display.

At a rally in Wilkes-Barre, Penn. on Tuesday, this young man took it to a whole new level:

Other patriots can only aspire to this guy’s gear game. If you watched this rally at all, you surely spent the whole time wondering how to acquire such American garb. Well, I did some digging, and I found the answer. 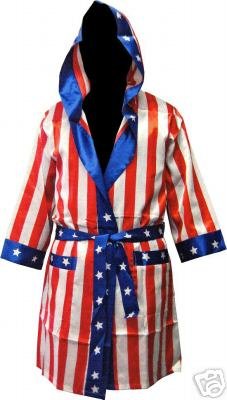 That’s right: It’s sold online as Apollo Creed’s American flag boxing robe. And you can get one for only $25! Then, when it comes to the general election, you can be that best-dressed, swagged-out bro behind Donald Trump at the rally.

If you aren’t convinced that this robe makes someone infinitely cooler, check out the video of the rally below. Our American hero guy does a lot of whoopin’ and hollerin’ — especially at around the 12-minute mark, when he passionately leads the crowd in exhorting “Lyin’ Ted! Lyin’ Ted!”