President Barack Obama has followed through on his promise to “bankrupt” the coal industry, causing coal use to fall by 29 percent since 2007, according to a chart published Thursday by the U.S. Energy Information Administration (EIA).

The huge decline in coal use is due to regulations by Obama’s Enviromental Protection Agency and cheap natural gas, which  “spurred increases in natural gas-fired power generation in several states, generally at the expense of coal-fired generation,” according to the EIA.

Coal use fell in every state but Nebraska and Alaska, devastating both the coal power and the coal mining industries, and even forcing Peabody Energy, the world’s largest coal company, to declare bankruptcy earlier this month. Other American coal companies have faced financial problems  as well. Arch Coal filed bankruptcy as well in January and coal companies like Alliance Coal announced mass layoffs. 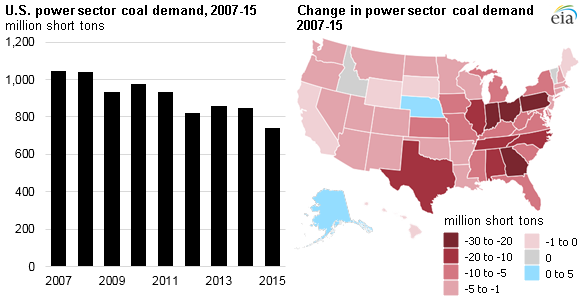 The systematic deconstruction of the coal industry has created very real economic hardship for the”coal country” of Appalachia, which has been economically devastated and offers very few job options for the now unemployed workers.

Coal mines lost 7,500 jobs last year alone, according to federal data. A study last April found the coal industry lost 50,000 jobs from 2008 to 2012. Much of the blame for the job losses is targeted at federal regulations aimed at preventing global warming, which caused coal power plants to go bankrupt, resulting in a sharp decline in the price of coal.

Even President Barack Obama has recognized this and stated that opposition to his policies by coal miners and people in Appalachia is “perfectly legitimate,” during a December interview with National Public Radio.

The situation for coal miners would likely get worse if Obama’s Clean Power Plan is fully implemented. The EIA predicts the plan would more than double the number of coal plants shutting down over the next five years. The shutdowns have a cascading effect, causing coal production to collapse by more than 30 percent over the next decade.

The Obama administration responded by offering a mere $14.5 million in federal funding for programs to retrain out-of-work coal miners, after imposing regulations that greatly hampered the American coal industry