Actress and star of CBS’s “The Good Wife” Julianna Margulies insisted that “women don’t have time” to be sleazeballs like men do.

Appearing on “The Late Show with Stephen Colbert” on Thursday, Margulies said, “It would be a miracle” to see a man stand next to his unfaithful wife at a press conference.

On her show, “The Good Wife” Margulies portrays the wife of a politician who is unfaithful.

Host Stephen Colbert asked Margulies, “Do you think that it’s time for a woman to be a sleazeball and a man to stand next to her? Don’t you think we’ve come far enough as a nation that a man would have to stand embarrassed next to someone?” 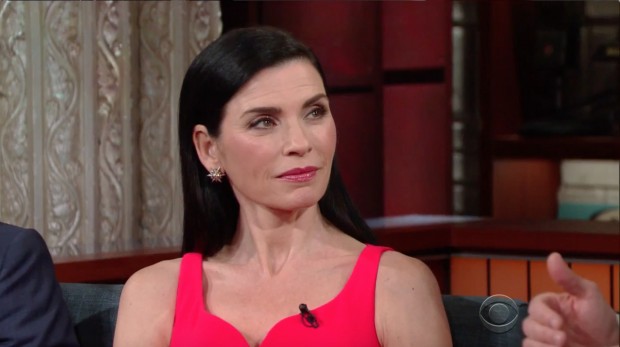 “It would be a miracle to see that happen,” Margulies said. “When we first started, I would get the question a lot: would this ever happen if the woman was the one who was the politician? And when I started the show, I was a new mom and wife and doing 14 hours a day, and I looked and at them, I was like, ‘Women don’t have time.'”

Margulies replied, “I think it would be a wonderful thing to see, but I don’t think it would ever happen. Women are just, we’re too smart to do that.”

The actress added that women were “too smart to get caught. … I do believe that women are a little bit above the level of taking a picture of things and tweeting them.”