The various nations of the European Union pay a lot more for electricity than American states do, according to an analysis of data by The Daily Caller News Foundation.

The DCNF aggregated average annual power prices from the E.U. and U.S. in 2013, the last full year of data. The average European spent 26.9 cents per kilowatt-hour on electricity, while the average American only spent 10.4 cents. 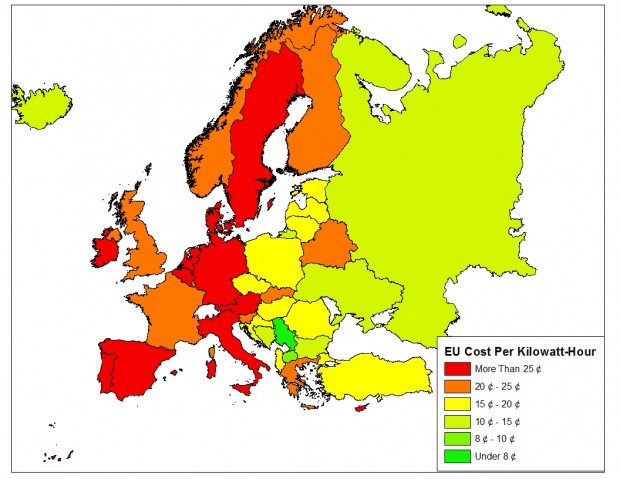 Denmark and Germany were the European nations with the most expensive power, with both countries paying roughly 39 cents per kilowatt-hour due to intense fiscal support for green energy.

Power prices are so absurdly high in both countries that cutbacks have already been made. Denmark’s new government pledged to reduce the amount of money it spends on “green” energy by 67 percent in December and Germany plans to abandon the construction of new wind power plants by 2019. 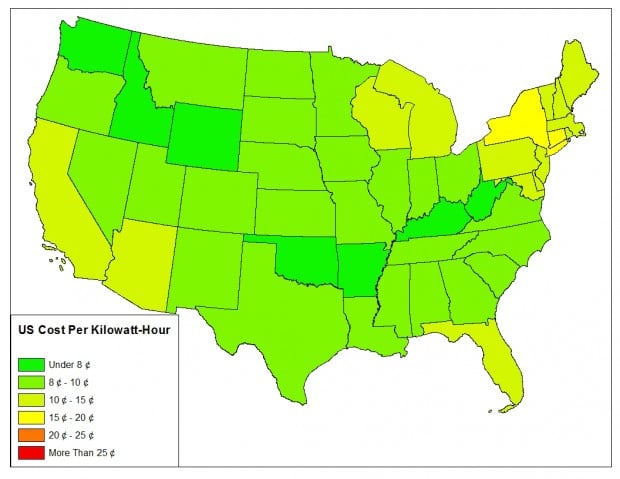 The priciest power in America’s lower 48 was in Connecticut and New York, which pay a mere 15.7 and 15.4 cents per kilowatt-hour. Both states are members of a voluntary cap-and-trade program and offer financial support to wind and solar power. Washington state and Wyoming had America’s cheapest electricity, paying 7.1 and 7.55 center per kilowatt-hour respectively.

“For years, European countries have forced a transition from reliable, affordable electricity sources like nuclear and coal to unreliable, expensive sources like wind and solar,” Travis Fisher, an economist at the Institute for Energy Research, told The Daily Caller News Foundation. “The only thing they have to show for it is skyrocketing electricity prices and struggling economies. In fact, the average German pays three times more for electricity than the average American, due in large part to Germany’s top-down ‘Energiewende’ or ‘energy transition.'”

Green energy subsidies and mandates have greatly increased the price of electricity throughout Germany. The government has mandated that the nuclear reactors be replaced with wind or solar power, but the estimated cost of doing so is over $1.1 trillion.

“The U.S. risks heading down a similar path with policies like EPA’s carbon rule, which would further shut down dozens of gigawatts of coal-fired power plants — on top of previous EPA rules that have already started us on that path,” Fisher continued. “The terrible results from the European approach to electricity policy should serve as a warning for U.S. policymakers, but instead the Obama administration continues to use Europe as a blueprint for policy in the U.S. The impacts could not be clearer: the forced “greening” of our power grid will make electricity costs soar, and those higher costs will ripple throughout the economy as they have in Europe.”

Even European Union nations where power is relatively cheap pay a lot more for power than any U.S. state. Great Britain, for example, pays an average of 54 percent more for electricity than Americans paid last year. Much of the expense comes from expensive subsidies for green energy, which account for roughly 7 percent of British energy bills, according to government study released last July.

“Sadly, we know higher electricity costs have a disproportionate impact on the poor and middle class who spend a higher percentage of their income on energy,” Fisher concluded.” The last thing Americans need right now is a ‘second rent,’ as Germans have taken to calling their electricity bills.”

Most analysts agree rising residential electricity prices are also harmful to American households. Pricey power disproportionately hurts poorer families and other lower-income groups as the poor tend to spend a higher proportion of their incomes on “basic needs” like power, so any increase in prices hits them the hardest.