Washington Examiner‘s Editorial Director Hugo Gurdon insists that news coverage of the 2016 presidential campaign will remain unbiased. This, despite the fact that the publication’s Managing Editor Philip Klein, who runs the newsroom, announced last night that he has left the Republican Party.

“Phil’s de-registration makes no difference to our news coverage, which will continue to be straight,” Gurdon told The Mirror. “He writes commentary, so he’s systematically made public his views for many years. Our news room editors and reporters hold a wide range of political views but they’re all professional journalists and we’re not in the business of polluting news stories with personal opinion.”

Klein, who also writes opinion pieces, has consistently made it clear that he despises Donald Trump, the GOP’s presumptive nominee. On Tuesday night, when Trump sewed up the nomination, Klein apparently couldn’t take it anymore and left the party. 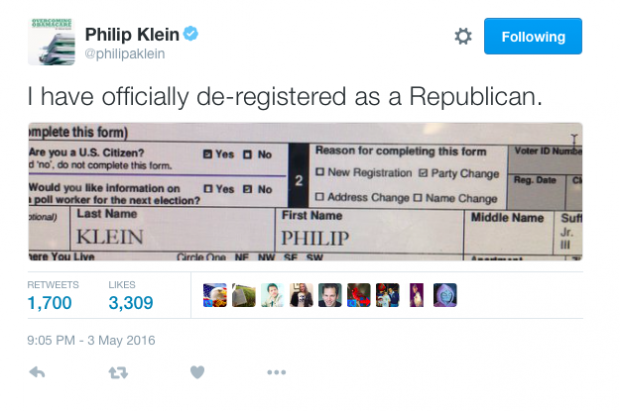 “My personal views concerning Trump will not alter the Washington Examiner’s commitment to covering the campaign fairly and accurately, nor will I try to distort our coverage or direct reporters to conform with my own opinions,” Klein said in an email to The Mirror. “Journalists everywhere have political views and go about their jobs in a professional manner, and it’s no different here. I have merely been open and transparent about my own personal opinions.”

Asked if he’d move to Canada if Trump wins, he replied, “As for moving, no. I would never leave my country — unless President Trump deports me.”

“Speaking for myself… he is not idealogically conservative,” Klein told host Tamron Hall. “There is the issue that he is not fit for office. …I don’t appreciate the way that he has exploited racism and sexism. …I just don’t want any part of it. I’m just going to continue to advocate my conservative principles… The Republican Party can go where it is. I just want no part of it.”

Klein sort of addressed the sticky journalism aspect of his decision.

“Well, keep in mind, I’m no spokesman for the Republican party,” he said. “I’m a Republican. I’m a journalist. So the Republican Party is more of a vehicle that Republicans are more likely to embrace a set of ideas …and a set of ideas that I happen to agree with. I do happen to think this is a soul searching moment for a lot of Republicans. …I think Trump’s nomination and success gives credence to a crude caricature.”

It’ll be interesting to monitor Washington Examiner‘s “news” coverage and see how polluted the coverage is (or is not) with anti-Trump stories.

Time will tell how far Klein will push his agenda in his newsroom.

Note to readers: Klein responded to my email not long after I published, so I added his comments in the story above.

UPDATE: A Washington Examiner employee told The Mirror, “So he joined every other journalist in DC? I’m shocked. But really, this competition among journalists over who can be more anti-GOP is going to end with someone self-immolating on the steps of Trump’s hotel. I just hope it’s somebody at WaPo and not Phil.”