“The truth will come out.”

“When you worked a 12 hr day and you’re wired and you can’t do anything but sit on your couch in the dark on Twitter.” — Miranda Green, political reporter, DeCodeDC.

“I am SICK of people mocking my surname on here. If I had a Muslim surname, you wouldn’t mock it, as that would be a ‘hate crime’.” — Steven Turdson, freelance British sports journalists.

“Ted Cruz kept saying God wanted him to be President, and this is what happened. So either there is no God, or he reeeeally doesn’t like Ted.” — Craig Mazin, former college roommate to Ted Cruz. Also this: “Ted Cruz called Trump a pathological liar, amoral and a narcissist. How does he not see he’s describing himself? Oh. I know. Narcissism.”

“Our long national nightmare has begun.” — Jeffrey Goldberg, The Atlantic.

“You guys gonna move him back the politics vertical? :)” — NYT‘s Nick Confessore.

Female journo warns that she won’t be gentle

“Do not expect kind or gentle words from me when it comes to the people who fought to destroy the modern conservative movement.” — TheBlazeTV‘s Dana Loesch.

“Disturbing how easily Trump pivots to praising man he called “Lyin’ Ted,” the father he linked to JFK murder, the wife whose looks he mocked.” — MSNBC political reporter Benjy Sarlin.

“Just asked @justinbieber if he had any thoughts on @realDonaldTrump&he said he had ‘literally no thoughts’ on it. Tonight’s a weird night.” — Ali Vitali, reporter, NBC News.

“Just ran into @justinbieber at a bar. Just asked him about @realDonaldTrump–> He has ‘literally no thoughts’ on him.” — CNN’s Jeremy Diamond.

Advice for anyone who is distraught over Trump’s win

“In the short term, go to bed, cuddle a teddy bear and suck your thumb. It might help.” — CNN’s Ana Navarro, friend of Marco Rubio and Jeb Bush. 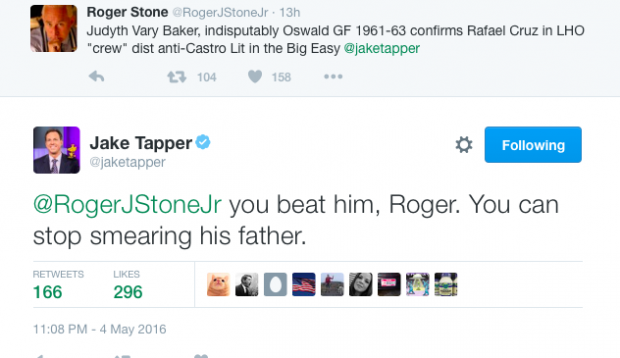