Conservative radio host Dana Loesch exterminated CNN Trumpette Kayleigh McEnany in the most vicious of ways Monday on her radio show. Loesch, who is vehemently anti-Donald Trump, went after McEnany for her bleach blonde hair, her pearly white teeth and her flat chest. Oh, and her pro-Trump stances and what it means to be a real conservative. 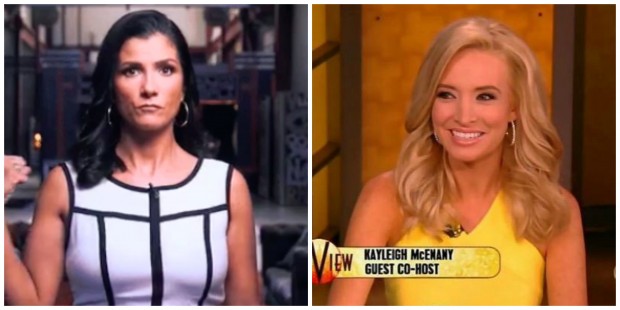 “A person who is very flat-chested is very hard to be a 10,” Trump, the GOP presumptive nominee, once said on Howard Stern‘s radio program.

But let’s get back to Loesch’s remarks about the Harvard, Oxford and Georgetown educated McEnany, who routinely appears on CNN in tight fitting blue, red and black dresses that exemplify her breast size, which, in The Mirror‘s estimation might be a strong B-cup.

Loesch, in part, was fiercely defending RedState‘s Ben Howe, who appeared on CNN Sunday on “Reliable Sources” alongside McEnany, who attacked him for not really being conservative.

Howe wrote, “My good friend Dana Loesch saw the exchange and went from amused, to mildly annoyed, to incensed on her radio show today as she threw the gauntlet down.” The Right Scoop also wrote about Loesch’s outburst and clearly had Loesch’s back. “Watch: Dana Loesch Destroys Trump Supporter Kayleigh McEnany,” the headline roared.

“Whew! That was bru-tal!” wrote RS. “But she [McEnany] deserved it for such an absurd statement. As if Trump is Mr. Conservative on anything. He doesn’t even know what the word conservatism means!”

Loesch began her radio program by bringing up Jesus, who apparently ran out the back door when she unloaded on McEnany, asking repeatedly, “Who is this chick?” Loesch referred to herself in third person: “Should I be real Dana or nice Dana?”

Here’s what set her off:

McEnany on CNN: “You are not a conservative if you do not support Donald Trump. …Where were they with John McCain who was for Cap and Trade, who was against the Bush tax cuts? Where was the ‘Never McCain’ movement? Where were they with Mitt Romney who laid out the blueprint for Obamacare?  Where were they leading the ‘Never Romney’ movement? Those movements didn’t exist. …What you have going on here is an elitist establishment that is rejecting their voters that says they know better than their voters.”

And then she went off.

“Who the hell is this chick?” she asked. “Who’s this chick? You heard of her before? I never heard of her until a week ago. Who is she? I had to look her up because didn’t know who she was. And I thought, well surely someone who has established themself as this keeper of the flame, as someone who has established themself as the definer of what is or is not conservatism…surely this person, they have mondo expertise and they’ve been in the trench and they have the bruises and scars to prove it, right?”

So Loesch says she looked into McEnany’s background.

“Beyond from having her lips overdrawn so she could repeatedly appear on cable news as a talking head for a particular issue, this chick has not been in any sort of battle nor has she ever been on the front line in anything ever,” Loesch said. “So you can back up, Miss, I don’t know what her name is, Michaela? I don’t know. Back up. Stay in your lane.”

Loesch went on to say she and others have been on the front lines of the conservative movement since 2008, which included phone banking, going door to door, and fundraising. Loesch is also in the healthcare business. She is a pitch model for a “heart healthy” medical cure that purportedly helps your blood pressure. She does TV spots for SuperBeets, a circulation superfood that you drink. She promises that it increases your energy and stamina. She says she drinks it every morning.

Suddenly Loesch stood up and went nuts on McEnany.

“Seriously, let’s have this conversation,” she said. “Where were you several years ago? Because I surely didn’t see you out there from my right or left. …And baby cakes this was more than just going on television and flashing them pearly whites and your flat-chested red dress over sprayed bleach blonde hair while you sit here and preach all this stuff about who is or isn’t a conservative. You like Trump? Let me act like him for a minute. Alright? I bet you love me now. Done with this crap. Who do you think you are? You didn’t do the heavy lifting.”

Loesch, who later mocked “girls with lip gloss on television,” said she had no regrets: “I don’t care how mean I sound. …Don’t want nuthin’ don’t start it.”