Gawker, not known for its tact, made a move late last week that was disgusting.

Short of crapping on IJ Review‘s Benny Johnson, they featured a story first broken by him and even, sort of, credited him. (Insert round of applause here.)

But they didn’t stop there. Instead of respecting the fact that Johnson got it first — a picture of GOP presumptive nominee Donald Trump eating a taco bowl with a picture of his ex-wife Marla Maples in a bright blue bikini beside him — they concluded their story by shaming him.

“The article was initially pointed out by Benny Johnson, because even a broken reporter can be right twice a day.”

“This is the 4th time this year that Gawker has been forced to aggregate news that I broke,” he wrote. “This must be hard for their editors who so joyously cheered my ‘demise’ in journalism. Every time they have to push one of my stories, they leave me a little love letter at the bottom of the article. Like Babe Ruth said, ‘It’s hard to beat a person who never gives up.'”

As everyone in the Washington and New York journalism worlds knows, Johnson was fired from BuzzFeed in the summer of 2014 for plagiarism. With BuzzFeed later deleting thousands of posts that didn’t fit their esteemed standards — and not all by Johnson by a long shot — the details of his firing remain murky. Did he deserve to be fired? As I asked previously, was he the site’s sacrificial lamb? Did BuzzFeed not properly train someone who had never worked in journalism?

These questions have never been adequately answered and they may never be.

The fact remains: Johnson never suffered the repercussions that most journalists who are caught committing plagiarism have. Which is that they are done, forever, with no hope of coming back. He wasn’t out of work for more than the blink of an eye. In fact, he went to Delaware and West Virginia to drown his sorrows and mull over multiple job offers and wound up doing a brief stint at National Review before landing at IJReview.

Does he deserve to have a stain on his reputation before he has years of doing things the right way under his belt? Of course. Should he be offering wisdom on journalism? Probably not the brightest idea. But instead of looking like complete imbeciles, maybe Gawker could save their bullet for another time.

Like when they’re not using information he found before they did.

No links for losers. See the screenshot of what Gawker did below. 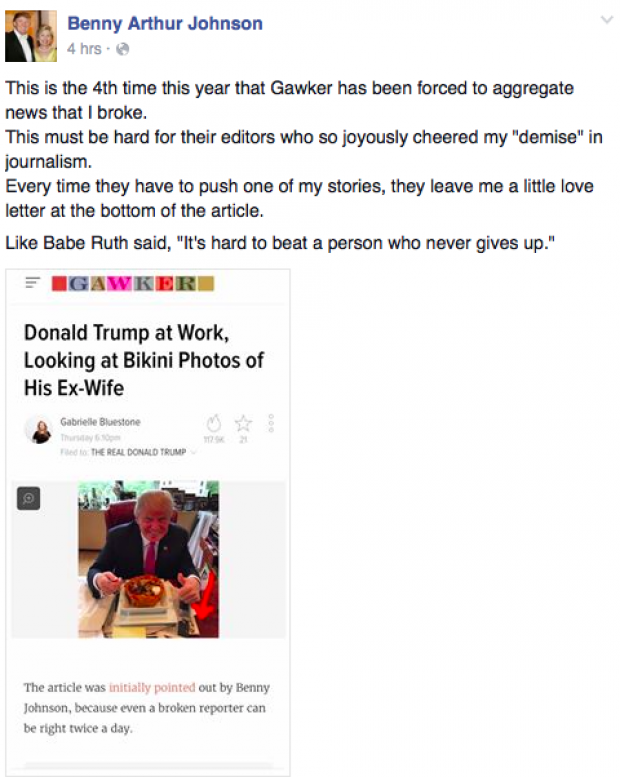