[dcquiz] Conservative radio host Dana Loesch may want to bury her head in sand for a day or two.

Not that she wasn’t entitled to trash CNN commentator Kayleigh McEnany for saying anyone who doesn’t support Donald Trump isn’t really conservative. But the fact that she went after McEnany for being “flat-chested” is something she may come to regret.

Especially since McEnany began the process of getting a preventative mastectomy in her early twenties because she is BRCA 1 positive. She had eight aunts who had breast cancer. 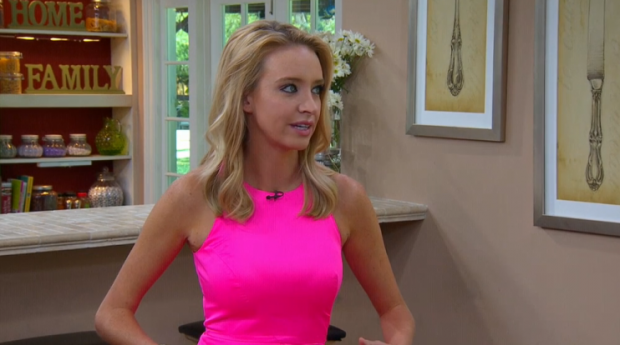 You can watch a video of her telling her story on the Hallmark Channel website here. She was 21 when she first learned she had a genetic predisposition for breast cancer.

McEnany took an unconventional route. “I had implants put in,” she said, explaining that she will later have her breast tissue removed. She also plans to have her ovaries removed at 35 after she has kids.

For now, she gets tested regularly: “I’m terrified every time I get an MRI. …It’s haunting.”

On a positive note, she said in the interview, “When they do the cosmetic surgery, you look fantastic. …You’ll be perky for the rest of your life.”

On Monday, Loesch went off on McEnany on her radio program, mocking her bleach blond hair, pearly teeth and flat chest. While McEnany never hurled any personal insults at Loesch and her pals on CNN Reliable Sources on Sunday, for them, being conservative is deeply personal.

Loesch has relatives who have died from cancer.

“While I don’t know her or anything about her, it changes nothing about the kind of environment Kayleigh believes is best for America or my point,” Loesch wrote The Mirror. “I know how horrible a disease cancer is: I lost both sets of grandparents, two aunts and two uncles on both sides to it and helped my family care for my cancer-afflicted WWII veteran grandfather when the VA failed him.

“Anyone who defends a candidate that has mocked a reporter’s disability, POWs, and blasted women as “bimbos” with “blood coming out of their wherever” surely has no problem with my addressing surrogates in a similar fashion. I’m sorry for the struggles she had but perhaps being the “victim” of my words can give her an insight into the kind of harm Trump’s words inflicts on others.”