Despite the protestations of Democratic presidential candidate Sen. Bernie Sanders and his legions of young socialist followers, free trade is more popular among millennials than any other age group in the country.

According to a YouGov poll, millennials split from the rest of the population in their support for free trade, with 48 percent saying free trade agreements are good for the U.S. and just 12 percent saying they are bad for the country.

“Free trade has been a fixture of this age group’s existence, however, as even the oldest would have only been seven years old when North American Free Trade Agreement (NAFTA) entered into force. The oldest Americans, those aged over 65, are the most hostile to free trade (39 percent to 23 percent),” says YouGov’s Peter Moore. 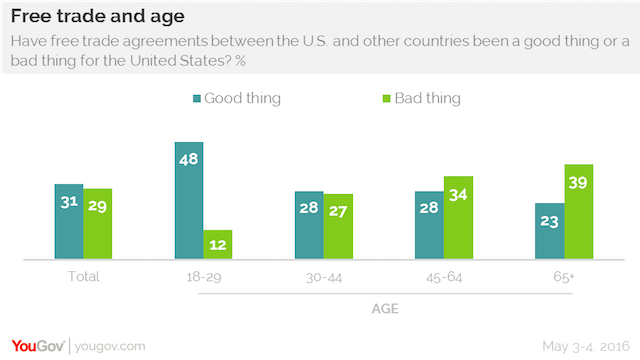 Free trade, on the whole, is unpopular with most Americans, who believe there are drawbacks for workers, the environment and product quality. 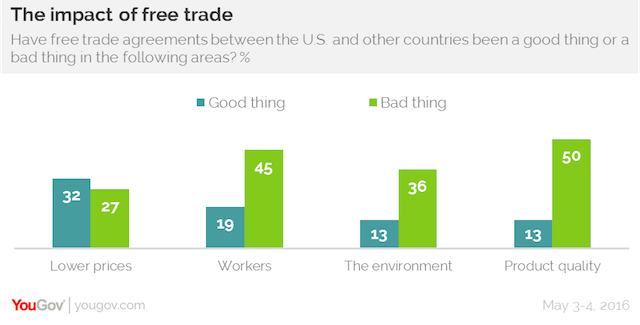 Chicago University’s IGM Economic Experts Panel surveyed 51 distinguished economists in 2012 on the question “freer trade improves productive efficiency and offers consumers better choices, and, in the long run, these gains are much larger than any effects on employment.”

Not a single economist disagreed with this statement. A questionnaire to 100 members of the American Institute for Economic Research, all with Ph.D.s in 2009, also showed overwhelming support for unfettered international trade.

Even the noble prize-winning economist and notorious left-winger Paul Krugman finds himself in agreement with free market heroes such as Milton Friedman on the question of trade. “If there were an Economist’s Creed, it would surely contain the affirmations ‘I understand the Principle of Comparative Advantage’ and ‘I advocate free trade’” says Krugman.

The Institute for International Economics estimates that over the past 50 years, freer trade has benefitted the average U.S. household to the tune of $9,000 per year.