She got so bored that she began live tweeting the experience.

At first she seemed to find solitude.

“First time I’ve been stuck in an elevator,” she wrote. “It’s nice to have ‘alone time’ but the bouncing is getting to me.”

But self-contemplation can get old fast.

“It’s like the Tower of Terror at @WaltDisneyWorld but only dropped three floors so far. #StuckintheElevator.”

Then came a really dumb question. 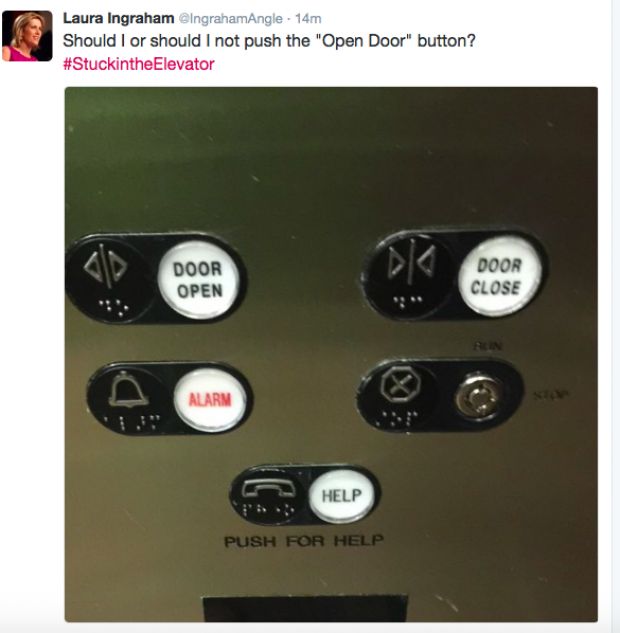 Ingraham began reflecting on her day and her dog urinating in the wrong place.

Who knows how this episode will end?

“When are you supposed to jump up if it starts to drop fast again?” she asked.

Finally a Twitter follower told her to push the “alarm” button. Which is the first thing someone stuck in an elevator might do.

“I pushed it and some nice person told me to ‘hold on’ whose office is no where near us.”

Ingraham said of course she already pushed the “Emergency” button.

UPDATE: Ingraham finally got fed up and sat on the floor.

“That’s it,” she wrote. “I’m sitting down now. Can’t tell where this elevator was made. #StuckintheElevator.”

Aaaaand….she’s out and blaming Hillary.

Not even getting stuck in an elevator can quell her anger at the presumed Democratic hopeful.