George Zimmerman made headlines for putting the gun he used to kill Trayvon Martin up for an online auction, but now the gun has disappeared from the site.

Zimmerman put the 9mm on gunbroker.com, with the auction set to begin at 11 a.m. Thursday. The bidding was to start at $5,000. But now the link has vanished.

When you go to the previous link, you see this: 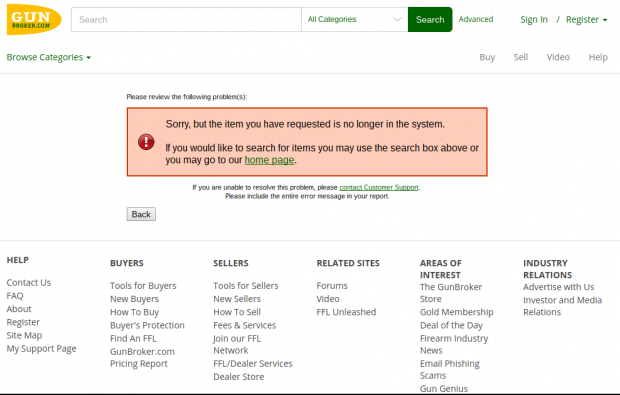 Zimmerman declined to comment to CNN about the webpage being down. He had promised in the listing that a portion of the proceeds would go to fight Black Lives Matter violence against police.

“Prospective bidders, I am honored and humbled to announce the sale of an American Firearm Icon,” the listing read. “The firearm for sale is the firearm that was used to defend my life and end the brutal attack from Trayvon Martin on 2/26/2012. Many have expressed interest in owning and displaying the firearm including The Smithsonian Museum in Washington D.C. This is a piece of American History. It has been featured in several publications and in current University text books.”

The Smithsonian has since issued a statement saying they were not interested in the weapon. Zimmerman was acquitted in the racially charged case in 2013. The acquittal sparked protests and accusations of a racially biased justice system and helped fuel the beginnings of the Black Lives Matter movement. Zimmerman said in the listing that the Department of Justice returned the gun to him.

“What I’ve decided to do is not cower,” Zimmerman told WOFL before the gun was taken down. “I’m a free American. I can do what I want with my possessions.”

The Martin family would not comment on Zimmerman’s auction and said they are focusing on gun control reform.

“This election season, we are laser focused on furthering that mission,” Martin’s family said in a statement. “As such, the foundation has no comment on the actions of that person.”