One of the hardest lessons I learned working in campaign politics was that the truth really doesn’t matter. At least not to Democrats.

When Democrats attack, they go for the jugular. They don’t worry about an attack being “fair.” They look to do as much damage as possible — by any means necessary.

Last week, when Speaker Paul Ryan (R-Wisconsin) said he was not ready to support Donald Trump, many in the media speculated this was to provide “cover” to congressional Republicans in competitive districts.

If this is really Speaker Ryan’s intent, it is a bad political strategy. There is no such thing as providing “cover.”

If Democrat operatives find Donald Trump to be unpopular enough, they will tie a GOP candidate to him in a New York minute, even if the GOP candidate publicly voices opposition to Trump.

I understand conviction. I understand opposing Trump on moral grounds. If a GOP candidate is ideologically #NeverTrump and feels compelled to say something about it, okay, whatever. But let’s not pretend this will impact the Democrats’ strategy in any way. They won’t hold back.

Democrats are still going to attack Republican candidates for supporting the “Party of Trump.” They are still going to say the GOP wants to Build A Wall, Deport Them All™. Congressman Bob Dold (R-Illinois), a fiercely pro-immigration reform Republican who publicly voiced opposition to Trump, is being attacked by the DCCC for being “anti-immigrant.” Yes. For real.

The truth, ultimately, doesn’t matter. If you’re a Republican this cycle, your electoral fate is tied to Donald Trump’s electoral fate. His victory is your victory. His loss is your loss. So why work against him?

Look, you can complain to the media about false attacks all you want. I certainly did. Back in 2014, I whined to conservative media about a false attack on former U.S. Rep. Bobby Schilling. Schilling had a pretty common pro-life stance — he supported ending taxpayer funding for abortion, he supported banning abortion after 20 weeks, and he supported the exceptions.

But the truth didn’t matter. Democrats invented a reality where congressional Republicans “redefined rape” — a claim rated “mostly false” by the left-leaning Politifact — and hit Schilling with this classy mail piece: 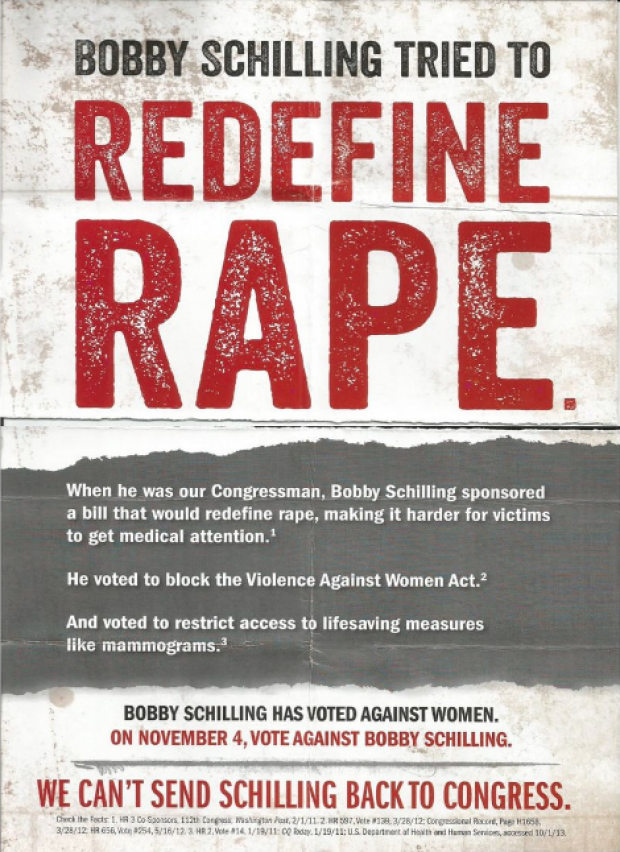 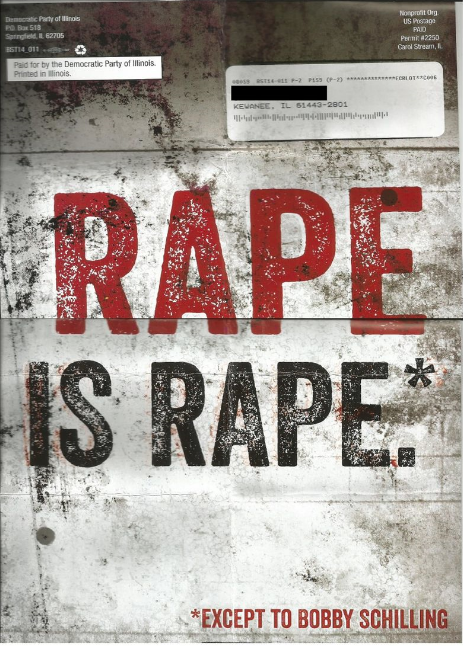 Nothing in that mail piece is true, but that’s exactly my point. The truth didn’t matter. The piece worked — it hurt Schilling with women — and Congresswoman Cheri Bustos (D-Illinois) went on to win a second term.

Republicans should expect nasty, false attacks. They shouldn’t expect “cover” if they take moderate positions. And they should prepare to be tied to Donald Trump.

But instead of fighting it, why not tap into what Donald Trump is doing so successfully? Why not reject the status quo and the establishment, shake things up, and run on a platform of making America great again?

Why not appeal to the millions of American voters who clearly hate Washington and hate the system as currently constructed?

Issuing a public statement against Trump, as Congressman Dold did, will not do much good. Democrats will make sure of that. There is no upside. GOP candidates might as well embrace their base, their party, and their nominee.