Six months before joining the State Department, the president of Human Rights First sent an email to a top Hillary Clinton aide suggesting he was more concerned with her image than human rights issues.

The email was included in 241 pages of emails that Judicial Watch released last week. The Judicial Watch emails came from private email accounts belonging to longtime Clinton aides Huma Abedin and Cheryl Mills and were reaped from a May 5, 2015 court order in a Freedom of Information Act (FOIA) lawsuit.

On March 11, 2009, Mike Posner, while president of Human Rights First — a nonprofit, nonpartisan 501(c)3 group — sent an email from a personal email account to his work address, and then forwarded it to Mills, who was serving as counselor and chief of staff to Secretary of State Clinton at the time.

Posner wrote Mills, “fyi – it is good we are moving to get this line of stories behind us –don’t want it to drift further into the broader public discourse of which this article is a small part.”

Posner was referencing a New York Magazine article about actor Richard Gere reacting to comments Clinton made before a February 2009 visit to China. Clinton had held a roundtable with the traveling press in Seoul, South Korea, where she explained why human rights issues involving Tibet and Taiwan wouldn’t be a top priority, since “we pretty much know what they’re going to say.” She added that, “our pressing on those issues can’t interfere with the global economic crisis, the global climate change crisis, and the security crisis.”

“I think she probably, I’m guessing, misspoke in the moment,” Gere told Wolf Blitzer on CNN. “And I can’t imagine that she would think human rights is ever going to be on the back burner.”

The New York Magazine article softly criticized Gere, who is a “passionate” Tibetan rights supporter, for providing “the rosiest explanation” he could muster.

Mills forwarded the email to Clinton’s hdr22@clintonemail.com address a day later, adding her own “fyi.” 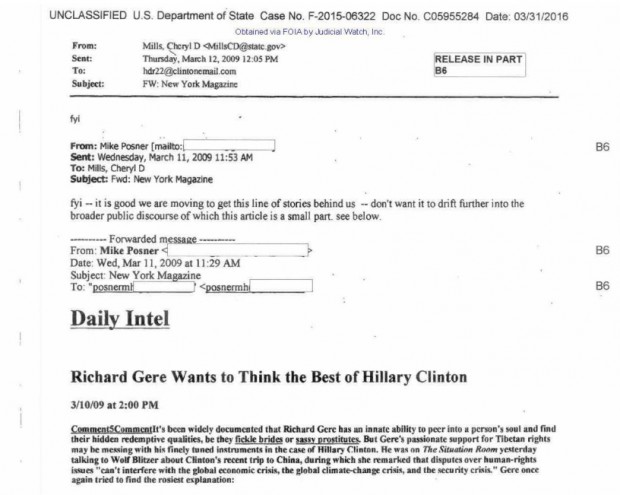 “We do not favor or oppose any candidate for public office,” Human Rights First says on its website. Four months later, on July 29, President Barack Obama announced that he was tapping Posner as assistant secretary of state for democracy, human rights, and labor. He was confirmed on Sept. 23, 2009.

Posner did not respond to a request for comment for this story.