On the same day Anthony Weiner’s spokeperson unwittingly lied to the media that the former New York Congressman’s social media accounts were hacked after he tweeted a lewd photo, Hillary Clinton and Weiner’s wife, Huma Abedin, had a “personal/family” email conversation, which was redacted once it was released by the State Department.

Before Weiner resigned after he pushed staffers to lie for him about his sexting misadventures with younger women, many journalists accused the late Andrew Breitbart of perpetrating a hoax for breaking the “Weinergate” scandal.

On in May 29, 2011, in an article published by The New York Post, Weiner’s spokesman Dave Arnold falsely claimed that “Anthony’s accounts on both Facebook and Twitter were hacked.”

“Anthony’s accounts were obviously hacked,” Arnold also told the Associated Press. “He doesn’t know the person named by the hacker, and we will be consulting on what steps to take next.”

The emails sent by Clinton at 5:12 PM and by Abedin at 7:00 PM were redacted for “personal/family” reasons. 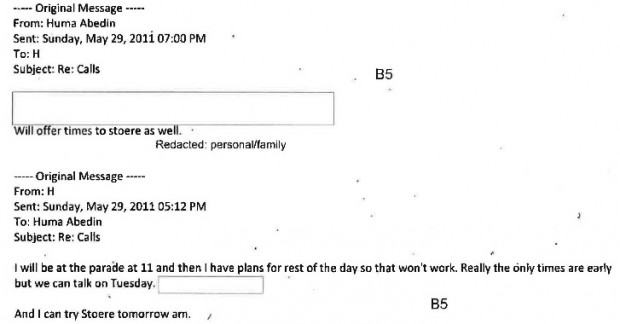 The emails were included in 241 pages of emails that Judicial Watch released the other week. The Judicial Watch emails came from private email accounts belonging to longtime Clinton aides Huma Abedin and Cheryl Mills and were reaped from a May 5, 2015 court order in a Freedom of Information Act (FOIA) lawsuit.

One half hour after Abedin responded to Clinton, The New York Daily News published a statement by the recipient of the tweet, 21-year-old college student Gennette Cordova. The Seattle co-ed said that she “assumed that the tweet and the picture were…attempts at defaming the Congressman and harassing his supporters.”

However, Cordova admitted that they followed each other on Twitter, and alluded to conversations, but claimed there had “never been any inappropriate exchanges.”

Earlier that Sunday, Weiner and Abedin were photographed taking a walk together in Forest Hills, Queens, while holding hands. Weiner declined to talk to the Daily News that day.

A week later, on June 6, Weiner tearfully admitted he sent the bulging underwear photo tweet and had lied about being hacked. Ten days later, after an explicit photo was leaked and the media began publishing excerpts from women who sexted with him, Weiner announced his resignation from Congress.