I call ‘em like I see ‘em: This was the most GIF-worthy episode of “Game of Thrones” in some time. And that’s how I plan on keeping you in the loop this week — with GIF requests for these moments.

The Jon Snow-Sansa embrace: The unthinkable happened on “Game of Thrones” tonight. Two Starks came face to face on screen in what seems like ever. Brienne, Sansa and Podrick arrived at Castle Black just as Jon Snow was prepping to head South. It’s a welcome change from prior missed family reunions (i.e. Arya failing to reach Catelyn and Robb before The Red Wedding) and a rare jubilant moment. I could lie here and say I didn’t tear up, but I’m not a liar.

Jon and Sansa reflected on their childhood at Winterfell, and Sansa even admitted she was an awful child — trust us, we know. Sansa told Jon her plan to take Winterfell back from the Boltons. Jon claimed he’s tired of fighting. Though after receiving a threatening letter from Ramsay detailing Rickon’s imprisonment, it looks like he’ll reassess his pouting. (RELATED: Let’s Talk About THAT ‘Game of Thrones’ (Not So) Shocker) 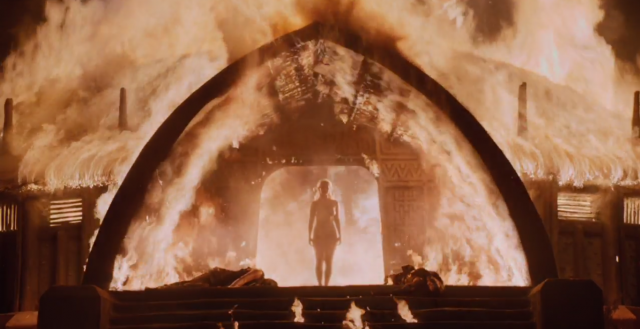 Dany’s fire moment: Daario and Jorah’s bromance came to a halt this week as they (quickly) tracked Dany down. I’ll admit this felt too convenient. I can’t complain too much, as it furthered the story while still developing character (i.e. Daario now knows Jorah’s doomed Greyscale fate). But what’s going to happen next?

When Dany meets with all the Khals in a hut, you know she’s about to do something only the Mother of Dragons could accomplish. And she does. After an onslaught of misogynistic insults and threats, she sets the hut ablaze (remember: fire can’t hurt her) — killing them all. She exits, naked, and stares out as the Dothraki bow down to her. Deja vu re: taking over all the places ever, but well-deserved. I’d like a Vine of this scene with “We Didn’t Start the Fire” in the background, accompanied by several thousand fire emojis. Internet, please oblige. (RELATED: Why Arya Stark Will Never Be The Same)

Ramsay slices more than just an apple: So goes the adage about introducing a gun in the first act…it’s going to go off. This scene proved a bottle version of the conceit. We’re introduced to Ramsay cutting an apple with the knife toward (?) him. Ramsay’s apple-slicing technique aside, the fresh Lord Bolton wielded the knife in a more effective way by killing Osha after some brief foreplay. Then he went back to cutting his apple. All in a day’s work, I suppose?

Other quality moments: Brienne letting Melisandre and Ser Davos know she killed Stannis; Littlefinger’s manipulation of both Lord Royce and Robin; Pycelle’s long-winded exit (at Cersei’s behest) from a chat with Tommen; the High Sparrow taking Margaery to a beleaguered Loras; Grey Worm and Missandei breaking it down for Tyrion by sticking for the slaves, following his seven-year phase-out suggestion to the Sons of the Harpy backers; Cersei and Jamie meet with Olenna. They want the Tyrell armies to come and stop Margaery’s walk of atonement.

And that’s not even including the impending Greyjoy drama now that Theon’s home. If this episode made one point clear, it’s to get ready for showdowns to end all showdowns this season. (RELATED: Behind ABC’s Jaw-Dropping Cancellations)