David Horowitz, who is himself Jewish, wrote the article for Breitbart.

Horowitz told The Daily Caller Monday that he also wrote the headline.

Horowitz never actually uses the word “renegade” in the piece. He instead calls Kristol’s opposition to Trump a “political miscalculation,” and only uses the word “Jew” in the last paragraph (the piece runs 20-plus paragraphs long) and never in reference to Kristol. 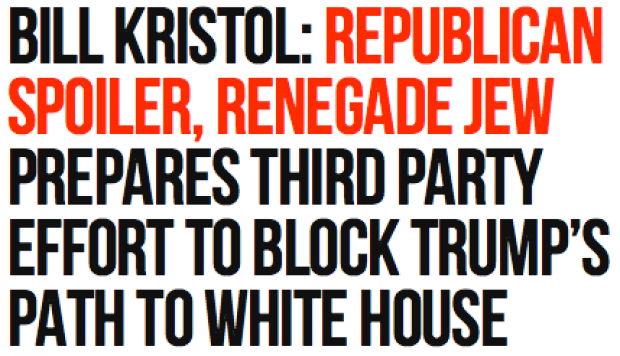 The article’s entire last paragraph seems inconsistent with the rest of the piece.

Unlike the rest of the article, the last paragraph is written in the first person and doesn’t actually mention Trump’s name. The rest of the article, on the other hand, is largely devoted to defending Trump’s character and foreign policy positions, as well as his claim — first pushed by the Trump-friendly National Enquirer — that [crscore]Ted Cruz[/crscore]’s father was with Lee Harvey Oswald shortly before he assassinated John F. Kennedy.

In the last paragraph the article’s focus switches to Horowitz’s Jewish heritage and the state of Israel:

I am a Jew who has never been to Israel and has never been a Zionist in the sense of believing that Jews can rid themselves of Jew hatred by having their own nation state. But half of world Jewry now lives in Israel, and the enemies whom Obama and Hillary have empowered — Iran, the Muslim Brotherhood, Hezbollah, ISIS, and Hamas — have openly sworn to exterminate the Jews. I am also an American (and an American first), whose country is threatened with destruction by the same enemies. To weaken the only party that stands between the Jews and their annihilation, and between America and the forces intent on destroying her, is a political miscalculation so great and a betrayal so profound as to not be easily forgiven.

The article was met with swift public backlash on Twitter, with many journalists accusing Breitbart of anti-Semitism.

In another response to the article, CBS political correspondent Jamelle Bouie tweeted that Breitbart is “now stormfront for millennials,” comparing it to a white supremacist website.

In a statement released to TheDC Monday afternoon Horowitz said he will “make no apologies” for his use of the phrase “renegade Jew”:

In mounting a Third Party run which would split the Republican vote and elect Hillary, Bill Kristol seems to be forgetting that the Iranians and their Jew-hating allies are openly preparing a second Holocaust in the Middle East (and then for the rest of us). Obama, Hillary, Huma Abedin and the Democrats are the chief enablers of this already planned Holocaust. Splitting the Republican vote and electing Hillary is a betrayal of the Jews in an hour in which their backs are to the wall. Hence the designation renegade for those who are planning a Third Party run, and for which I make no apologies.

Sunday night’s article came after the left-leaning Southern Poverty Law Center slapped Breitbart with charges of racism for its defense of a white supremacist movement deemed the “Alt-Right” — a movement often accused of blatant anti-Semitism.

Jamie Weinstein contributed to this report.

Update: The article was updated to include Horowitz’s response.