Michael Strahan returned to television on Tuesday, but this time it was on “Good Morning America” as a full-time host.

The 45-year-old didn’t acknowledge that it was his first day on the show since he left “Live with Kelly and Michael” Friday. Instead, he went right into interviewing Chrissy Teigen.

The Sports Illustrated Swimsuit model and John Legend recently had a daughter, Luna, and Strahan spent the segment talking about their family. (RELATED: Michael Strahan Was Blindsided When Kelly Ripa Made This MASSIVE Dig At Him) 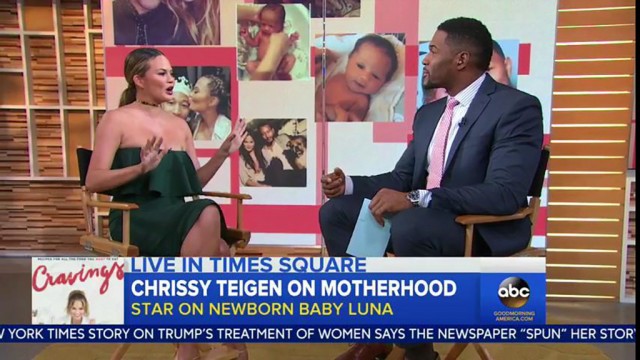 “I don’t even want to say because everyone already thinks John is so perfect, so I love to kind of twist it and make sure people know that nobody is perfect but I have to say he’s been great,” Teigen told Strahan. (RELATED: Jimmy Kimmel Asks Kelly Ripa ‘What Happened’ With Michael Strahan)

As initially reported, Ripa was furious after she found out that Strahan would be leaving her show and joining “Good Morning America” this fall.

She said she felt “disrespected and humiliated” and took a week off work.