Phil Robertson said guns could have prevented the Paris attacks. 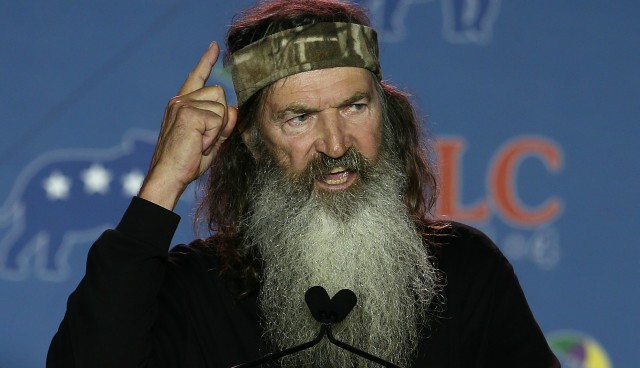 At the debut of his film “Torchbearer” at the Cannes Film Festival, the “Duck Dynasty” star explained the movie’s poster, which is a picture of Robertson clutching a Bible in one hand and a rifle in the other. (RELATED: Rob Lowe Slammed For ‘Racist, Ignorant’ Tweets About Paris Terrorist Attack)

“It’s a picture of spiritual warfare,” Robertson told the crowd. “A gun is going to prevent someone from robbing my household and raping my wife and there’s five of them, and if I have a weapon, I have a chance.”

“It’s like San Bernardino — if someone just had a weapon. Or Paris. And it would have helped [if the Jews were armed in Nazi Germany].”

“It took Bibles and guns in order to found America,” Robertson added. “It did take guns to send the Brits back to where they came from.” (RELATED: Singer Who Was Performing During Paris Attack Believes It Was An Inside Job)

“They seem alike. They all want to conquer the world.”