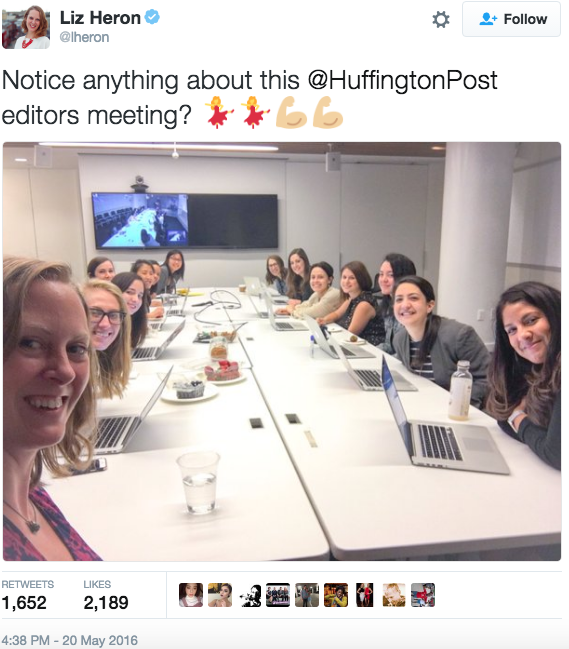 I don’t mean their lack of diversity in race and gender. I mean their lack of diversity in thought. There’s no point in going out of your way to read HuffPo, because you already know what they’re going to say. It’s boring. The last time I bothered with that site was when Greg Gutfeld was still writing there. (Vich Arianna vuss not happy about, I’m told…)

I’m always glad to see a conservative invading a liberals-only space. You’ve got S.E. Cupp on CNN. You’ve got Joe Scarborough on MSNBC, on those mornings when he flips a coin and decides to be a conservative. Heck, even my boss used to work at both of those places. I think that’s a good thing. Preaching to the choir isn’t enough. Sometimes people need to hear things they don’t want to hear. Sometimes making them think is better than making them applaud.

Michelle Fields, the conservative reporter who had Donald Trump’s campaign manager charged with battery, has a new job.

Fields is heading to the Huffington Post, where she will cover the 2016 campaign with a specific focus on Trump and the Republican Party.

“After the tumultuous events of the last few months, I am ready to get back to writing and reporting on what is without question the most bizarrely fascinating presidential race of my lifetime (and, perhaps, any lifetime),” Fields said in a statement on Sunday night.

After Trump lackey Corey Lewandowski grabbed Fields, and then lied about it and smeared her professional reputation, most of her colleagues at Breitbart.com turned their backs on her. They sided with the big tough guy who pushes around small women. Fields had to leave her apartment because of harassment by “alt-right” creeps. Even to this day, they all still lie about her.

I’m glad they don’t like that she’s taking a job with HuffPo. I enjoy it when idiots become angry.

Give ’em heck, Michelle! And this time, that lying little toad Lewandowski had better keep his hands to himself.

1
The Media Was Desperate, But Virginia's Gun Rally Proved Them All Wrong
Media
2
Bill Hemmer Sends A Message To Fox News Viewers As He Replaces Shep Smith
Politics
3
Tucker Carlson Gives Donald Trump The Formula For Winning A Second Term
Media
4
Here Are The Members Of Congress On Trump's Impeachment Team
Politics
5
Tim Tebow And Miss Universe Demi-Leigh Nel-Peters Tie The Knot: 'All Of My Dreams Have Come True'
Entertainment