If you’ve seen Captain America: Civil War — and considering it’s made $350 million in less than three weeks, you probably have — you may have had the same quibble I did. Sure, it had action and adventure and an interesting ideological conflict between two groups of good guys, but… Steve Rogers is super-boring, isn’t he?

Don’t get me wrong, I’m #TeamCap all the way. I thought Rogers did the right thing by protecting Bucky, his oldest friend and the helpless victim of those evil Hydra bastards. He chose liberty over authority. But he kinda got blown out of his own movie by RDJ, didn’t he? Cap is a stick in the mud. An old fuddy-duddy. Being right is never much fun in the first place, but he just makes it a drag.

Sure, he wears red white and blue on the outside, but on the inside? It turns out Steve Rogers, a.k.a. Captain America, supports the evil, former Nazi organization, Hydra.

Marvel comics introduced the shocking twist Wednesday morning when Captain America: Steve Rogers #1 went on sale — and it turns out there have been hints that this was coming for a long time.

That’s right, Cap has been one of the bad guys all along. Goodbye, “God bless America.” Hello, “Hail Hydra!”

To which I say: Well, duh. It’s been right under our noses this whole time. Just look at the cover of the very first issue back in 1941, months before the attack on Pearl Harbor and America’s entry into World War II: 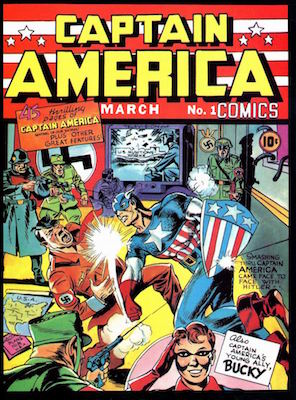 If you want to create the perfect Nazi spy, what better way to throw those Amerikanische Schweinehunde off his scent than to have him punch out Der Führer? It established his bona fides perfectly. All those decades of fighting super-Nazis and giant floating heads and stuff, that was all just part of Captain America’s deep, deep cover.

I mean, just look at the guy: 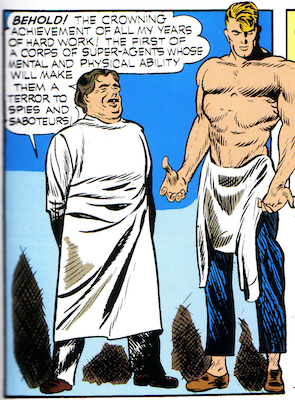 He’s the Aryan ideal! And he was created by a “former” German scientist who “escaped” the Nazis. Wink wink, nudge nudge.

But don’t worry, everybody. This is only temporary. After all, Cap died a decade ago and that didn’t last. More recently, he got turned into a withered old man and was replaced by the Falcon (who used the opportunity to hang around at gay-pride parades because it pisses off right-wingers). That didn’t last either. So now they’re pulling an “Everything You Know Is Wrong” and making him a brainwashed Nazi? Ehhhhh. He’ll walk it off.

Because regardless of the short-term sales boost this “shocking twist” gives Marvel, even as debased a creature as the American comic-book fan isn’t going to keep reading a book where the symbol of America is literally a Nazi. Once the sales numbers dip too low again, Marvel will find some other “shocking twist” to get people interested.

It’s dumb and it’s cynical and it won’t last. That’s because it’s a comic book, and comics are all about the illusion of change.

So say hello to Captain Nazi, for now. Sure, Jack Kirby and Joe Simon just turned over in their graves, but big deal. At least it sells a few more units!