Move over, Adolf. There’s a new book-burner in town!

Earlier this week, Marvel Comics capitalized on the box office success of Captain America: Civil War by revealing that ol’ Winghead has totally been a Hydra spy the whole time: 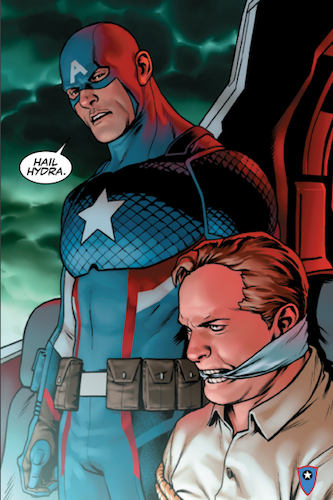 You might not recognize him without his #MAGA hat, but Marvel says that this really is Captain America. Not a clone or an imposter or a Life Model Decoy. He’s not being mind-controlled or coerced. That’s really him, and he really means it. Cap is a damn Nazi.

And now, in a development that will be amusing to anybody who knows anything about the Nazis’ censorship tactics, one young fellow has taken to Twitter to express his extreme displeasure:

@nickspencer never picking up one of your comics again. Good job. pic.twitter.com/Qkj4IiFYJ8

It makes sense, when you break down the logic:

Those things aren’t cheap either, man. Good thing he didn’t buy it on his iPad.

Of course, even if this wasn’t an act of ahistorical petulance, it wouldn’t change a thing. The kid already bought it. Marvel already got his money. They don’t care.

Burning cultural objects that make you angry is for Nazis. Please don’t do it.