MSNBC national correspondent Joy-Ann Reid has yet to pay off her still open nearly $5,000 tax warrant that attracted a good bit of attention last year. Ditto for the nearly $600,000 for two tax warrants that New York lists for MSNBC host Rev. Al Sharpton.

Here is the backstory.

National Review contributor Jillian Kay Melchior created a stir on April 22, 2015 that Reid and then afternoon host Touré Neblett were in the hock with the Empire State for thousands of dollars. Melchior was apparently following up on a well-circulated report that then-host Melissa Harris Perry was just slapped with a $70,000 federal tax lien.

Additionally, “Last month, New York filed a $4,948.15 tax warrant against Joy-Ann Reid, who serves as managing editor of theGrio.com and until earlier this year hosted MSNBC’s The Reid Report, and her husband, Jason. Reid has called taxes on the wealthy “a basic fairness argument,” also arguing for ‘smart spending and smart tax increases’ to create economic growth.”

Embarrassing stuff but MSNBC rushed to provide the best possible spin to then-Politico media blogger Dylan Byers by explaining Neblett and Reid were in the process of paying down their debt.

MSNBC officially said zilch. That was actually what Byers reported, unsourced and without any corroborating evidence.

Noting that Toure, Reid, Sharpton and Harris-Perry owed the government money Byers assured readers that all four “are believed to be working on paying off their outstanding debt.”

Believed by whom, Dylan?

Phil Griffin? The MSNBC flack who spoke to you on background?

Who else but somebody at MSNBC would even be privy to such information about Toure, Reid, Sharpton and Harris-Perry? Indeed, MSNBC, tried to spin, without attribution and off the record, Washington Post media blogger Erik Wemple about the embarrassing disclosures but he declined.

So, for folks who don’t want the Byers/MSNBC spin, what is the reality as of Monday evening? 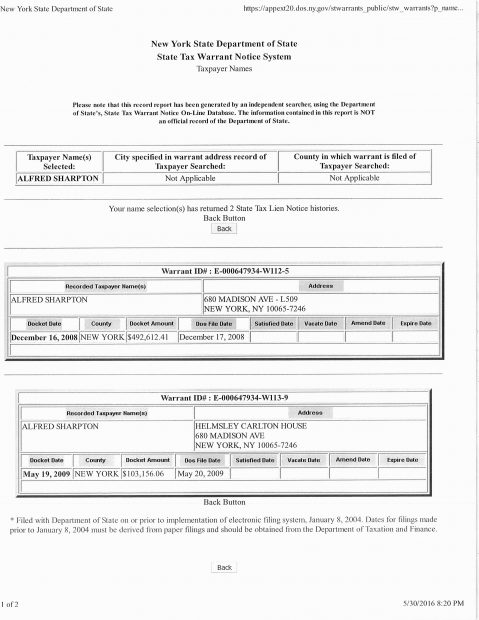 Sharpton insisted to the New York Post and New York Times in 2014 that he was paying down his debts. The Times article noted that his insistence conflicted with “information provided by state officials.”

Maybe Byers just concluded that Sharpton who in 1998 was found guilty of defamation for his Tawana Brawley hoax, is eminently trustable these days?

Byers and his MSNBC fellow travelers did not reply to requests for comment.