It’s not a politician, a general or a well-known businessman.

The name of the person being wooed to run for president as a third party candidate by Weekly Standard editor Bill Kristol and others is a conservative writer named David French.

The revelation was made Tuesday afternoon on Bloomberg TV’s “With All Due Respect” show. “According to our sources, we can now report the man being eyed by Kristol is a conservative lawyer, writer and Iraqi war veteran named David French. You’ve probably not heard of him. We hadn’t either,” said host Mark Halperin.

Over the weekend, Bill Kristol, the editor of the Weekly Standard, wrote on Twitter: “Just a heads up over this holiday weekend: There will be an independent candidate–an impressive one, with a strong team and a real chance.”

Just a heads up over this holiday weekend: There will be an independent candidate–an impressive one, with a strong team and a real chance.

According to his biography on the magazine’s website, “David French is a staff writer at National Review, an attorney (concentrating his practice in constitutional law and the law of armed conflict), and a veteran of Operation Iraqi Freedom.” 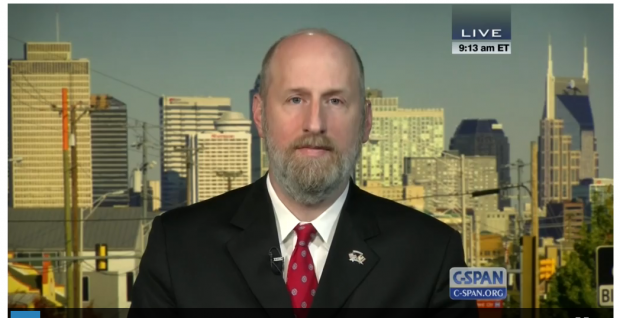 He wrote the book “Rise of ISIS: A Threat We Can’t Ignore,” graduated from Harvard Law School, and lives in Columbia, Tenn.

I’d gladly vote for David French over either Hillary Clinton or her donor Donald Trump.

But other conservatives, like Townhall editor Guy Benson, expressed incredulity that French could be successful.

David French is a good, thoughtful, principled man. The idea that he would have a “real chance” is preposterous.

French has recently called for a third party candidate. Earlier this month, he wrote: “America needs a third party alternative, and it needs one quickly. As I tweeted earlier tonight, Americans who constantly complain about corrupt and politicians have voted by the millions to put two of the most dishonest candidates in America front and center in the general election.”

Last week, French called on Mitt Romney to run, writing: “You’re the only man who can save us from future calamity.”

An alliance of conservative activists and writers have, so far, unsuccessfully woo a credible, serious contender into the race to run against Donald Trump and Hillary Clinton.

Challenges for someone like French would be ballot access, name recognition, money to fund a real campaign and reaching at least 15 percent in the polls to be included in the debates.

One third party candidate, Libertarian Party nominee Gary Johnson, will already appear on the ballot in all 50 states and has been polling at 10 percent in some surveys.