A new study published Wednesday by the Mercatus Center ranked states in order of fiscal responsibility, and the top 10 all had Republican leadership.

The study ranked states according to five key fiscal characteristics: cash solvency, budget solvency, long-run solvency, service-level solvency and trust fund solvency. States that only did well in one or two categories but poorly in others were ranked in the middle of the pack, while states that did poorly across the board remained at the bottom of the list.

In order to ensure a universal result, the Mercatus Center didn’t associate partisan data with results, that was added in by this agency.

The study also defined the five categories viewed as most indicative of financial health. Cash solvency was defined as whether or not a “state has enough cash on hand to cover day to day bills.” Budget solvency was defined as a state’s ability to “cover its fiscal years spending with current revenues.” Long-term solvency is a state’s ability to “meet its long-term commitments.” Service-level solvency deals with cash flow, or “the ability of the state to increase spending if demanded by its citizens.” Trust-fund solvency is the amount of debt a state has. 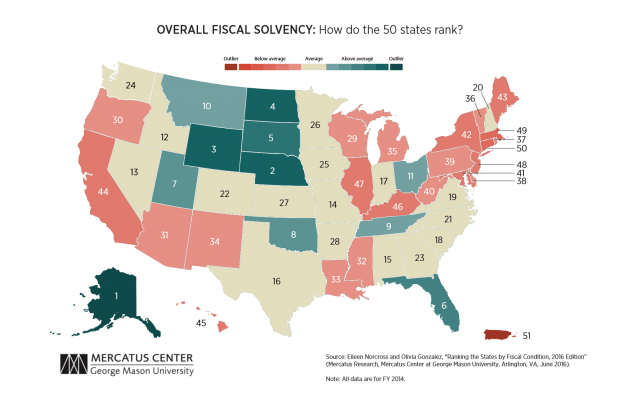 It should be noted not every state had the same record-keeping procedures. Some states made it difficult to access data created within the past few years. However, the states at either end of the spectrum did produce the numbers needed.

Have a tip? Email phillip@dailycallernewsfoundation.org