Our next big war will be at a time of China’s choosing. To recap, China has built seven big, new, shiny military bases in the Spratly Islands of the South China Sea. Other countries also have bases in the Spratly Islands, bases that they have had for decades. China considers the continued existence of these other bases an affront and at some stage will scrape them all off their islands. Japan will come to the aid of the Philippines because they will be next on the agenda if China isn’t stopped. China knows that so their opening move will include surprise attacks on Japan and the U.S.

China’s bases in the Spratlys are impressive feats of engineering, formed by an armada of cutter-suction dredges. Counter-intuitively though, the existence of these bases has made China easier to defeat. Nobody wants a war with China — the coming war is China’s indulgence alone. Nobody wants to set foot in China in the process of fighting them which is going to make getting the Chinese to accept defeat more difficult. But the existence of the seven new bases in the Spratlys, which have to be taken from China, makes the task easier. Those bases have to be removed from Chinese possession and their conquest will make Chinese acceptance of defeat easier by providing a battlefield defeat.

So the question from here is what is the most cost-effective way of doing that? The Chinese bases are three islands with 3,000 meter long airfields – Fiery Cross, Subi Reef and Mischief Reef, and four smaller bases on Johnson South Reef, Gaven Reef, Cauteron Reef and Hughes Reef. It seems that the role of the bases with airstrips is to provide mutual fire support with fighter aircraft. For example, there are four hardened aircraft shelters at the southern end of the airfield on Fiery Cross Reef, presumably for fighters on ready alert. It seems that the role of the smaller bases is to provide radar coverage in support of the airfield bases. The smaller bases have substantial forts with flak towers and very few openings at ground level. They are designed to make assault as expensive as possible. 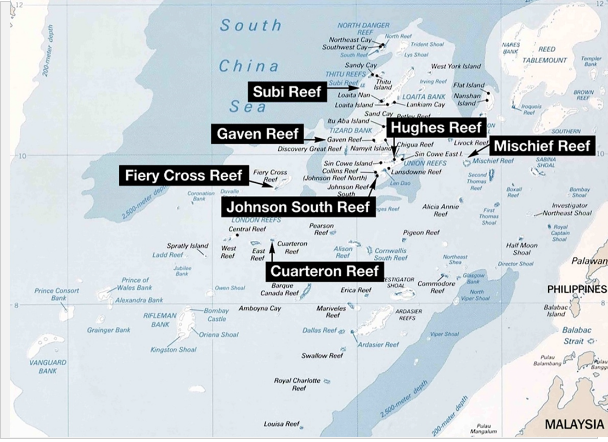 The Chinese have built a lot of reinforced concrete structures on their ersatz islands which are going to soak up a lot of ordnance. The choices in supplying that ordnance are from land, sea and air. Let’s examine the options in that order. After the recent Balikatan exercise of U.S. forces with their Filipino counterparts, the HIMARS launchers in that exercise were transferred to Palawan Island, which is the closest Filipino ilsand to the Spratlys. Those launchers can fire the ATACMS missile with a range of 300 km. That means they can pound the Chinese base on Mischief Reef which is 230 km from Palawan. An ATACMS round costs $860,000. With a warhead weight of 160 kg, that is a delivered cost of $5,375 per kg of warhead. That’s it for ground-launched ordnance that can reach the Chinese bases in the Spratlys.

Ground-launched cruise missiles were developed late in the Cold War but these were destroyed in the settlement of the subsequent peace. Which is a good thing because that means that we can start again and get a low-cost design. When British engineers examined V-1 flying bombs in WW2, they concluded that its manufacturing cost was the same as that of a car. The same is true today. If you are not designing to nuclear standards, a cruise missile to deliver a 100 kg warhead over 1,200 km shouldn’t cost more than $20,000. But it is unlikely that will be ready in time for China’s war.

Next up is sea-borne ordnance. The weapon of choice over the last two decades has been the Tomahawk cruise missile. These can be launched from more than 1,000 km out from their target, meaning that they could be launch from the Sulu Sea and thus safely behind a fighter screen. With a price of $1.6 million a copy and a warhead of 450kg, the delivered price per kg is $3,555 – comfortably lower than ATACMS and with more flexibility. Then we come to Zumwalt class firing Long Range Land Attack Projectiles (LRLAP) with a range of 140 km and a cost of $400,000 per copy. With a warhead containing 11 kg of high explosive, the cost of the high explosive delivered is $36,363 per kg – which is close to the current price of gold. Firing those things at the enemy is like firing slugs of gold at them, both in cost and effect as those little warheads would have no impact on most reinforced concrete structures. And that does not include the cost of the Zumwalt itself at $7,000 million a copy. Including that, we might as well be flinging diamond-encrusted tiaras at the enemy. The Zumwalt also carries 80 missiles in vertical launch cells but most of those are for self-defence. It would be better, and this goes for a lot of naval vessels, to carry HIMARS vehicles in the helicopter hangers and these could shoot ATACMS from 300 km out – much safer and far more effective.

What remains is attack from the air. The best of these is the small diameter bomb with a range of 110 km when launched from 30,000 feet. With a cost of $100,000 and a warhead containing 17 kg of high explosive, the cost of high explosive delivered is $5,882 per kg. It can also penetrate up to three feet of steel reinforced concrete. Kg for kg, small diameter bombs are much the same as ATACMS though the Chinse have no defense against the latter.

This is how it is likely to go down. The counter-attack against the Chinse surprise attack will begin in the Spratlys with a barrage of ATACMS missiles which will take out the radars and hole the three runways. Planes that have taken off won’t be able to land again or they will have to fly 1,000 km north to Hainan Island. Cruise missiles will then continue to suppress the defences and allow fighter aircraft to approach within 100 km and launch small diameter bombs. With the Chinese missile defences down and no ability to operate aircraft, destroyers could then safely approach to pound the islands with their five inch guns. The Marines were itching to get involved in the Senkaku Islands a couple of years ago but have gone quiet about what is awaiting them in the Spratlys. It is an enormous task but it can be done. Let’s do it cost-effectively.

David Archibald is the author of Twilight of Abundance (Regnery).