Gov. Terry McAuliffe’s GreenTech Automotive company launched four years before he was elected Virginia’s chief executive in 2013, but the firm still hasn’t sold a single car despite backing by the U.S. government and millions of dollars invested by the State of Mississippi and Chinese corporate interests.

McAuliffe resigned as GreenTech’s chairman in 2012 and today he has a lot of other things on his mind — including a federal investigation of his campaign finance practices — but the long-time insider confidante of Bill and Hillary Clinton just can’t quite put the troubled venture in his rear-view mirror.

The latest revelation about GreenTech came May 28 when the Roanoke Times said a U.S. Customs and Immigration Services decision it obtained rejected the firm’s rosy promise to build and sell thousands of electric cars and trucks in a Mississippi production plant as “not credible by the preponderance of the evidence.”

In fact, GreenTech has only produced 25 vehicles, none of which have been sold, according to the documents reviewed by the Virginia newspaper. The company had promised to produce at least 30,000 vehicles annually starting in 2014. GreenTech’s MyCar tops out at 25 miles per hour due to regulatory restrictions in the U.S., according to a company news release.

Virginia Democrats pointed to GreenTech as evidence of McAuliffe’s entrepreneurial skill when he was running for governor and initially claimed the company would create jobs. McAuliffe, however, quietly resigned as the company’s chairman in late 2012 and distanced himself from the business, winning his Virginia gubernatorial bid in 2013. (RELATED: Emails Show McAuliffe Pressured Officials To Allow GreenTech Funding)

The Department of Justice is now investigating whether McAuliffe’s 2013 gubernatorial campaign accepted illegal donations from foreigners, according to CNN.

The state is looking at renegotiating the firm’s incentive agreement, according to a Mississippi official.

“I can confirm the company has not met its jobs and investment totals,” Mississippi Development Authority Public Relations Manager Jeff Rent told The Daily Caller News Foundation. “The state is working with the company to best protect its investment and to keep Mississippians employed by the company working.”

Less than a mile down the road from GreenTech’s assembly line, Karen Mitchell, who works at the Hollywood Cafe, told TheDCNF that “they say they’re supposed to employ about 350 people but as far as about how many they employ, I don’t know.”

The company is funded largely by the controversial EB-5 investment-for-visa program, in which wealthy overseas donors invest between $500,000 and $1 million to create a certain number of jobs in an economically depressed area, in exchange for visas.

The U.S. Securities and Exchange Commission has investigated the company’s use of the visa program.

GreenTech claims it built a car factory in Mississippi to meet its EB-5 visa requirements to create local jobs, but Mitchell isn’t sure where the workers came from or live.

“I would think that if anybody came here to work they would relocate, as to the type of work out there that they do,” Mitchell said.

GreenTech was supposed to stimulate the economy of Tunica County, Mississippi, where unemployment reached as high as 20 percent in 2011 and stood at 9.3 percent in July 2015, according to the most recent data available from the Bureau of Labor Statistics.

“What you have here is you’re in the middle of a delta, and it’s kind of desolate,” Mitchell continued. “It’s a very poverty-stricken area.”

A May 2012 memorandum of understanding between GreenTech and the state of Mississippi reveals the Virginia-based green car company dedicated to development and producing environmentally friendly, energy-efficient vehicles was supposed to create 350 local jobs and invest $60 million in Tunica County. In exchange, the state promised a $3 million loan and a $3 million Community Development Block Grant, and Tunica County promised GreenTech $2 million for the land.

GreenTech’s LinkedIn page, which has been updated as recently as Memorial Day, says the company has only between 50 and 200 jobs worldwide, far short of its 350 target for its Tunica plant alone. 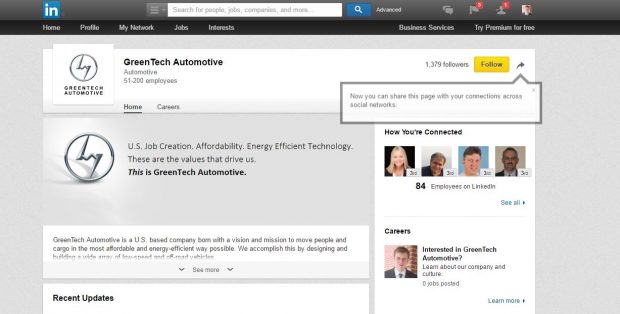 GreenTech Automotive’s own LinkedIn page doesn’t claim to have the 350 jobs it was required to create in Mississippi. Screenshot: LinkedIn/Andrew Follett

When GreenTech did not respond to a phone call and emails, TheDCNF visited GreenTech’s headquarters in McLean, Virginia. An employee in the office who claimed to be staff refused to answer any questions about the company or even identify herself, calling TheDCNF intruders.

Six days after the visit, GreenTech spokesman Dennis Carter contacted TheDCNF, but refused to divulge any information about how many cars they’ve produced or sold.

“GreenTech Automotive Inc. was founded in order to create American manufacturing jobs in one of the most economically depressed regions of the country,” Carter told TheDCNF in an email. “The company has succeeded in establishing a new manufacturing facility in Tunica County, Mississippi and in creating and maintaining American jobs.”

“Despite the fact that there has been no relationship with any political persons for many years, the company is still suffering negative consequences from vicious and disparaging politically-motivated attacks that have impaired the company’s access to capital and operational resources, among other adverse effects.”

“Recently, individuals have trespassed onto company premises and began filming without permission, misrepresenting the purpose of their visit, all in order to pursue a political agenda unrelated to the company and its business. The company will continue its mission to build its business and to receive fair treatment for its investors in compliance with applicable law.”

TheDCNF gave GreenTech officials one more opportunity to say how many cars they’ve produced or sold, but GreenTech declined to respond.

TheDCNF recorded the visit and posted the video below, which clearly shows TheDCNF reporters promptly identified themselves as members of the media.