That’s according to a YouGov poll released Friday. In less than three weeks time, the United Kingdom will vote on whether or not to remain a member of the EU for the first time in more than 40 years.

The vast majority of world leaders, British political parties, and international financial organizations have come out to support Britain remaining in the EU. But when it comes to the average British voter, the picture is more uncertain.

“For many voters the question of whether Britain should stay or go comes down not to complex ideas of sovereignty and unity, but a simple calculation of whether they and people like them, benefit from the EU or lose out from the EU,” says YouGov’s Peter Moore. 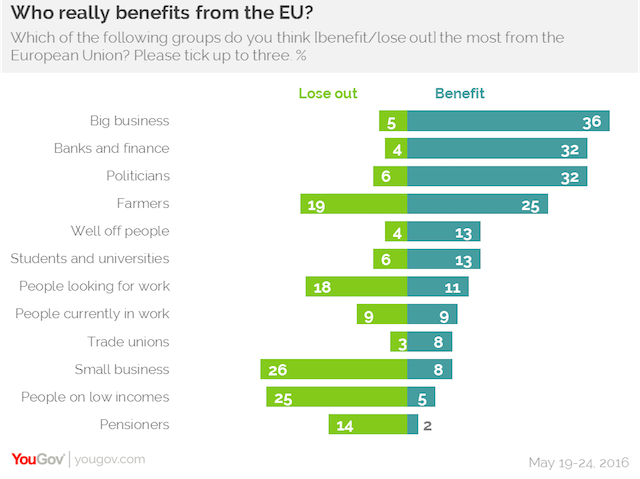 Who really benefits from the EU (Credit: YouGov)

The poll will give credit to the “Leave” campaign’s argument that it represents the people against vested interests and European elites. Ironically, the same day YouGov released its poll showing Brits think the EU is a boon to big banks, the head of JP Morgan made a speech warning Brexit would be a “terrible deal” for the U.K. (RELEASED: Poll: Brexit Could Spark Wave Of Anti-EU Referendums Across Europe)

The “Remain” campaign is focusing its argument on the economy, arguing EU membership is good for jobs and investment in the U.K. The Leave side is targeting immigration as its trump card. The pro-Brexit side claim if Britain left the EU immigration from Europe could be restricted.